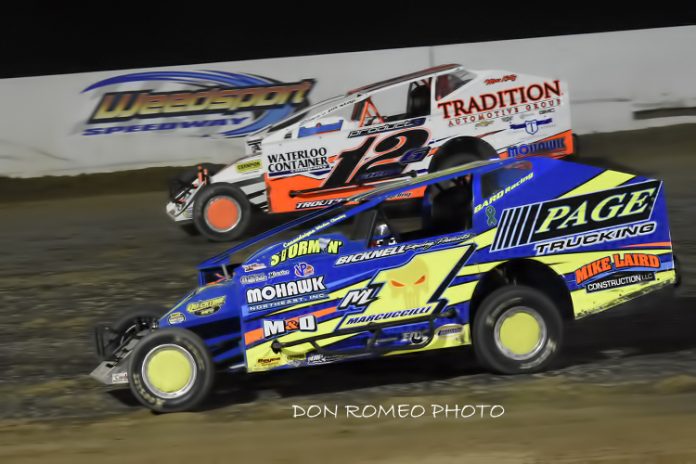 WEEDSPORT, NY – The 5th annual Weedsport Speedway Sportsman Classic, presented by Industrial Tire of CNY and powered by Stirling Lubricants, will take place on Tuesday, July 3 with $2,500 on the line for the winner in a 75-lap feature format featuring the DIRTcar Sportsman Series.

Weedsport Speedway is proud to welcome back Industrial Tire of CNY as this year’s presenting sponsor.


Industrial Tire of CNY is a family-owned and operated company funded by Dennis Beaudette over a decade ago, and will continue to be in the family name for another generation with Dennis’ two sons, DJ and Marty following in their father’s footsteps.
With 24/7 road service, Industrial Tire of CNY can help with many of your tire needs including rim reconditioning, mounting/dismounting, foam filling, bead repairs, agricultural tire repairs, and more. Call Industrial Tire of CNY today to schedule an appointment or to learn more at (315) 399-5335. Be sure to also visit online at www.industrialtirecny.com.
For the first time, the night’s action will be powered by Stirling Lubricants, based in Rochester, NY.

Stirling Lubricants’ qualified experts are proud to manufacture these oils and lubricants for their customers specific requirements. Stirling Lubricants is also a distributor of High Performance and High-Quality Lubricants including a vast line of chemicals.
For more information call (585) 461-8310 or visit online at www.stirlinglubricants.com.
Included in the night’s schedule will be the RUSH Late Model Series as well as the NY6A 600cc Microsprints. A huge fireworks display will cap off the Independence Day holiday for fans in attendance.