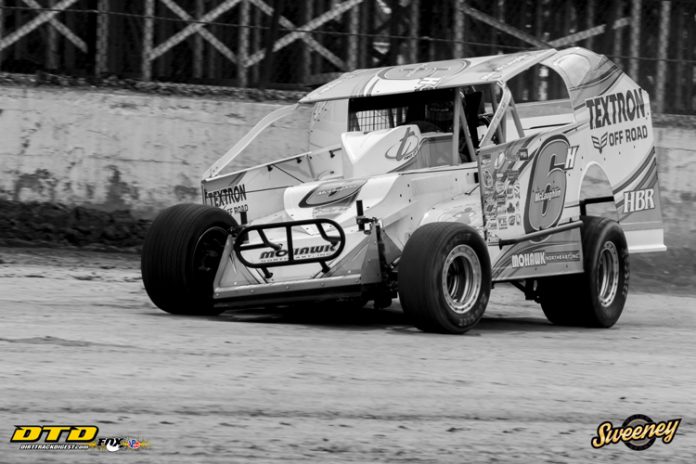 WEEDSPORT, NY – More than 20 dirt track racing machines took to Weedsport Speedway on Sunday afternoon in preparation for the 2018 season.

Running during the heat of the day, the all-new Weedsport Speedway racing surface, which was applied in the fall of 2017, stood up to the challenge.

“I’m very happy with the race track,” said Weedsport Speedway promoter and Big Block Modified driver, Jimmy Phelps.  “There was some loose material at the top of the track that created some of the dust, but the track was very good in the racing groove.  It turned slick as it should in the sun, but its smooth and I think it will provide good racing in a couple weeks.”

Phelps was joined by a handful of Big Block Modified drivers on track Sunday including Max McLaughlin, Andrew Ferguson and Gary Tomkins.

Big Block Modified and Sprint Car ace Mike Mahaney was on hand in the Emery No. 33 360 Sprinter along with Derrick Juliano and Johnny Kolosek.

Kolosek was the only caution of the afternoon as his No. 26 Sprint Car found the turn one water barrels halfway through the afternoon.  Kolosek was ok, as was his racecar, as the machine was re-fired on its way back to the pit area.

A pair of NY6A Microsprints were in the pit area as well preparing for the season opener on Sunday, May 20.  Local kart racer DJ Shuman was among the Microsprint entries, turning a number of laps on track in his No. 62.

The Ice Breaker 50 presented by WACK 1420AM will open Weedsport Speedway’s racing season on Sunday, May 20 with the DIRTcar Big Block Modifieds, Spano Container Sportsman and the NY6A Microsprints.

Pit gates will open at 3 p.m. on May 20 with the grandstands opening at 4 p.m. and racing taking the green flag at 6 p.m.

Only general admission seating will be available with adult pricing set at $20.  Kids 11-17 will be admitted for $8 with kids 10 and under free.  Pit admission is $30 for members and $35 for non-members.