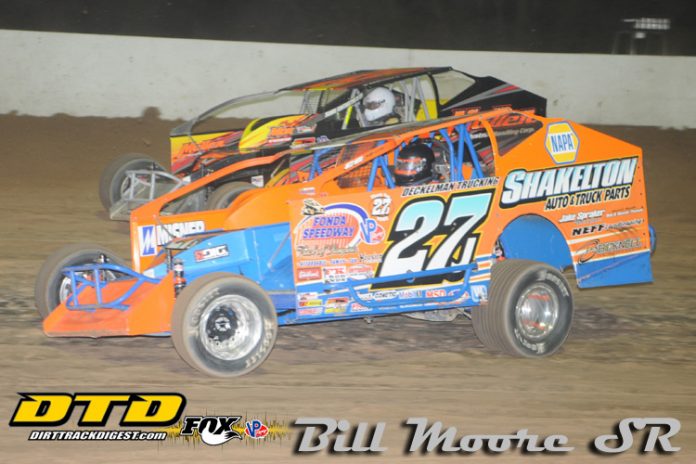 WEEDSPORT, NY – One of the greatest Big Block Modified drivers in DIRTcar history is now making his mark in the NASCAR Camping World Truck Series.  But, that doesn’t stop Stewart Friesen from continuing to win races on the dirt and returning to his favorite local speedways, including Weedsport for the Super DIRTcar Series Heroes Remembered 100 on Monday, May 28.

Friesen made his debut in the NASCAR Camping World Truck Series in what was supposed to be a one-off deal at Eldora Speedway in 2016.  However, Friesen made his mark and a one race deal quickly turned to five more races before the end of the season, which has now turned into a full-time position with his Halmar-Friesen/GMS truck team based in Mooresville, NC.

Sitting seventh in the NASCAR Camping World Truck Series standings as of May 17 with two Top 5 finishes and 44-laps lead, Friesen is continuing to creep up on his first career NASCAR victory.

“We definitely have some good equipment now and can race with those guys,” said Friesen, who recently finished third at Kansas Speedway.  “Wins are tough and that is no matter what division you’re in.  You can be the best of the best and be great all night and have something not go your way.  We’re just going to keep working hard and keep our heads down.  We have a great race team here and our alliance with GMS is something I am super proud of and we’re building great race cars that have definitely picked up their pace over the last year or so.  We’re just going to keep on track and get busy.”


Leading up to the Heroes Remembered 100, Friesen has been on a roll in Modified competition with wins at Grandview Speedway, Georgetown Speedway, Fonda Speedway and Orange County Fair Speedway.

Friesen will now look to continue his recent stretch of fantastic runs at The Port which saw the No. 44 visit victory lane last July in the Hall of Fame 100, with a runner-up finish in September’s Labor Day 100 behind Matt Sheppard.

“We always look forward to running the 44 at Weedsport, it has become one of the marquee tracks in New York State,” said Friesen.  “It is probably one of the most technical and challenging as well, but we have had some great success there and look forward to keeping the momentum going.”

If you’re interested in keeping up to date with Friesen’s results and racing schedule be sure to visit online at www.stewartfriesen.net.