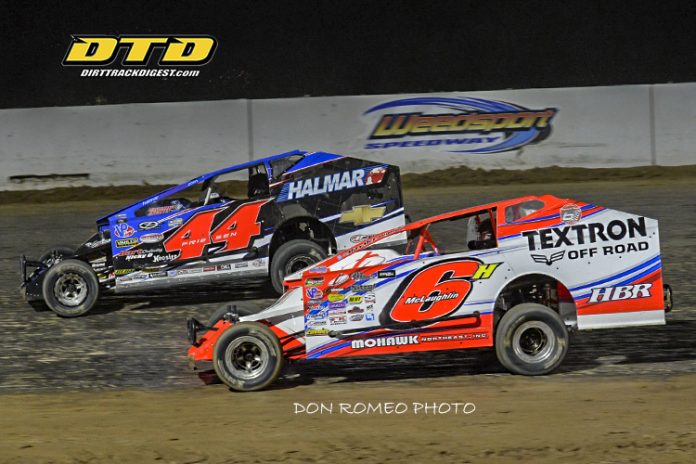 WEEDSPORT, NY  – Can a race that is lead flag to flag by the pole sitter be exciting? You bet it can. Folks will be talking about this one for a long time. Full-time NASCAR Craftsman Series Truck driver Stewart Friesen needed every ounce of talent, determination, and equipment he had to hold off the 18-year-old HBR driver Max McLaughlin. The pair diced and dueled through lapped traffic for the better part of the 100 lap Feature. McLaughlin closed in for the kill multiple times, but Friesen stayed slippery and managed to gap 6h again and again. All the effort was worth it as Stewart Friesen becomes the first guaranteed starter for this year’s NAPA Super DIRT Week.

When the dust settled, Stewart Friesen pulled his Halmar Racing Big-Block Modified up on Victory Hill nose to nose with the NAPA Super DIRT Week Pace Car to celebrate the victory. For Friesen, winning a NAPA Super DIRT Week Qualifier brought him nostalgia and piece of mind as he knows he’ll start the 200 lap finale in October no matter what happens during the week before it.

“The new qualifier series is awesome. It’s something like a blast from the past. I grew up watching the Syracuse Qualifiers when I was a kid, so to have a guaranteed spot is great. You never know what’s gonna happen with that deal. That brings a sense of relief. I’m sure it gets everyone excited about Super DIRT Week, which is our biggest event of the year.”
Friesen started on the pole and lead every lap but it was by no means an easy task. The Halmar 44 stretched a lead in the first third of the race but then Mike Mahaney in the no. 88 Buzzchew Chevy brought out the race’s only caution flag after getting crossed up in turn 2. Friesen then had to balance managing his equipment with racing through lapped traffic and holding off McLaughlin.

“I was trying at the beginning to save my stuff but pushing hard enough when I needed to. That top line that I was living on in 3 and 4 started going away. I just couldn’t hit a really good rhythm into 3 but once I found that launch pad on the bottom of 2 I was able to get into 3 and the lapped cars just kept coming back to me. The lapped cars hurt until I caught them. Then once I got into lapped traffic I kind of liked it because I could fill some holes and at least try to stay side by side a break a run if someone was coming. It’s tough without knowing where he was coming. He’s (Max McLaughlin) is a great kid and an even better driver. The improvement he’s made driving these cars over the last three years has been crazy.”

Friesen’s next race with the Super DIRTcar Series will be at Albany-Saratoga Speedway for Brett Hearn’s 10th Big Show as he’ll be racing the NASCAR Truck at Texas Motor Speedway at the same time the Series goes to Brewerton Speedway on Friday June 15.


Second-place finisher and crowd pleaser Mad Max McLaughlin showed great pace all day. He was second quickest in his qualifying group during Time Trials, which placed him on the outside pole for Heat Race 4. When the green dropped on the Heat, pole sitter Larry Wight shot into the lead using the sparse moisture on the low line as the track had begun to dry out and get slick. McLaughlin however had other ideas. He went straight up to the wall and was able to carry a lot of momentum around the top of the track. After overtaking Wight, McLaughlin used both top and bottom lines to old off the Gypsum Express 99L until the checkered flag. In the Dig Safely NY redraw, McLaughlin drew 6th with some heavy hitters starting in front of him. He couldn’t hide his excitement in Victory Lane despite falling one position short of winning:

“We had a great car. The track was a blast. I’ve been here a few years, and this was the best race I’ve seen at Weedsport. This is was best track condition I’ve ever seen. They made a lot of changes over the winter and it really showed tonight. It was probably the most fun I’ve ever had in a race car but coming in second really sucks. 18 years old. 2 years on the series. To be in second place and racing for the win is pretty damn cool.”

After a disappointing DIRTcar Nationals at Volusia Speedway Park, the HBR team had been left with some big questions but on Memorial Day, both HBR cars finished on the podium. McLaughlin had this to say about the race:

“We were really good on the long run. On the top side Stew got the jump on the start. It took me a lap to get my grove back. There is a ton of grip off two and I could get a good run into three. This TEO chassis is awesome, you know this is the best we’ve been in a long time. It’s a great way to start off the Series points racing.”

McLaughlin is looking forward to the next Super DIRTcar Series race, which is scheduled for Friday, June 15 at Brewerton Speedway. “I got a win there (at Brewerton) late last year. We were really good at the end of the year. We’ve been trying everything this year before the Series starts. We’ve been throwing everything at the car to get it work when it’s slick like it was tonight.”

Earlier in the day there was no slowing down defending Series Champion Super Matt Sheppard. He took the Billy Whittaker Fast Time Award and a Heat Race win. After starting 7th, Sheppard pressured the top runners but never mounted a serious challenge to the top 2 and would settle for a 5th place finish.

The Super DIRTcar Series will be back in action on Friday June 15 at the D-Shaped Demon, Brewerton Speedway for the Showdown at Sundown 100.

The Super DIRTcar Series is the premier Big-Block Modified tour of North America. Tour regulars, such as eight-time Series Champion Brett Hearn and current title-holder Matt Sheppard, pit their 800 horsepower Big-Block Modifieds against the best short track racing drivers over a 35-race schedule on 21 tracks from Canada to Florida. In 2018 there are 17 drivers contending for the Series Championship. Follow along for news and notes on Facebook and Twitter.