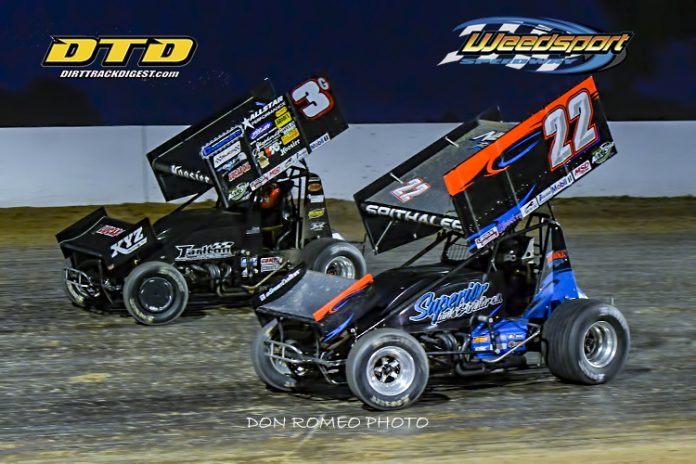 A total of 23 Big Block Modifieds signed into Weedsport on Sunday with Tyler Trump and Larry Wight drawing the front row for the 40-lap, $2,500 to win special.

Trump, piloting a 358-Modified, darted out front at the drop of the green, but soon after Wight took command in his No. 99L drawing Trump with him in a two-car run away early on.

As Wight and Trump set sail in the lead, all eyes were on Sheppard starting from the inside of row four. By lap-4, Sheppard had gone by Ron Davis III for fourth and the crowd knew it was only matter of time before ‘Super’ Matt drew in on the podium positions.

Just three laps later Sheppard rolled by Ward for the third position, with Sheppard being the only car on the speedway rolling the middle of the track with any success at the front.
At the quarter point of the show, Sheppard closed in on Trump for second just as Trump attempted to lap the slower Tim Murphy into turn one. Trump tried to dig even lower but clipped the inside jersey barrier nearly losing control with Sheppard on his back bumper.

Fortunately, all three drivers were able to continue on as Wight contined to lead the fray.
Shortly thereafter Sheppard again found the middle portion of the race track to his liking, rolling by Trump for second into turn one on lap-12.

However, in a matter of just seven laps, Sheppard cut the lead to only .6-seconds at the halfway point of the event and was now looking for the lead in the No. 9S.

On lap-23 Sheppard officially took command with an outside move into turn three and was never again challenged at the point.

Sheppard would go on to win the green-to-checkered 40-lap event, scoring his second Weedsport win of the season, his 20th career victory at The Port, and his 15th overall win of the 2018 season.

The next Big Block Modified event at Weedsport Speedway will be the Super DIRTcar Series Hall of Fame 100 on Saturday, July 28 as a part of Hall of Fame Weekend.

Carson Macedo dominated the first ever All-Star event to be held at Weedsport, worth $5,000, leaving a terrific battle for second between Paul McMahan and Danny Dietrich.
McMahan would emerge as the runner-up over Dietrich, Aaron Reutzel and Parker Price-Miller in the front five positions.

The next event at Weedsport Speedway will feature the USAC National Sprint Cars with Thunder on the Erie on Tuesday, June 19. The USAC National Sprint’s first ever visit to The Port will see a three-division program along with the Spano Container Sportsman Shootout Series and the NY6A Micro Sprints.