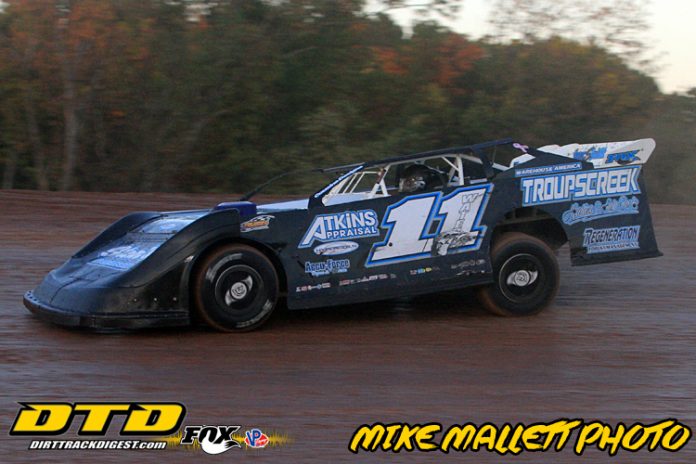 WEEDSPORT, NY – The Sweeney Chevrolet Buick GMC RUSH Dirt Late Model Touring Series powered by Pace Performance headed to the Empire State for a special Independence Day Eve program in the first ever appearance at the showplace Weedsport Speedway. Race #8 of 19 was tape delayed by MAVTV/SpeedSport.TV for the first ever nationally televised broadcast for Crate Late Model racing, which will be shown on August 23 on MAVTV at 7 and 10 p.m. Television was made possible by presenting sponsor Sunoco Race Fuels distributed by Insinger Performance. Alternative Power Sources, Close Racing Supply, and CrateInsider.com were segment sponsors. In addition, Pace Performance sponsored the in-car cameras, while Three Rivers Karting sponsored the speed shot wall camera.

John Waters came out on top of one of the most thrilling RUSH Late Model Touring Series events in some time stealing the win away from Charlie Sandercock on a late race restart in an event that featured an amazing five different leaders. Waters, who was running third and trailing the leader by seven seconds with six laps to go, couldn’t have picked a better time to capture his first Sweeney Tour win of 2018 as the $2,000 victory came in front of a packed house on national television. Waters became the sixth different Tour winner in eight races thus far this season!

“I didn’t know where we were (before the caution came out) but I knew my car was just coming on,” explained the 37-year-old Whitesville, NY victor. “When you can pass guys like Kevan (Cook) and Chad (Homan) at their home base here you know your stuff is going pretty good. I really didn’t know what the deal was with Charlie. He’s strong. We got up there and chose the bottom and I was like ‘whoa Charlie Sandercock just picked the bottom’ and I thought ‘good that’s where I want to be’ and it worked out!”

Kevan Cook led the field to green following his dash win, but it was Chad Homan using the top to power into the early lead. A spin by second place points man, Jason Genco, brought out a caution with just one lap scored. On the restart, Cook grabbed the lead, while Waters moved into the top five. Sean Beardsley would pass Sandercock on lap three for third, moved past Homan for second, then charged into the lead past Cook on lap four.


Sandercock would get going taking third from Homan on lap six. He then ran down Cook on lap eight and one lap later made the pass on the outside of turn four for second. Beardsley was setting a torrid pace out front. When Beardsley caught lapped traffic on lap 11, his lead was a half-straightaway. Meanwhile, Homan and Cook were battling for third. Contact was made on lap 12 with Homan getting the spot. Waters quietly entered contention when he moved into fourth on lap 17 dropping Cook back another spot.

As Sandercock worked hard to catch Beardsley, a hotly contested battle for third was raging as Homan was trying to fend off Waters, Cook, Caswell, Jason Parkhurst, and Chris Fleming as the six New York racers were in a tight pack. Sandercock closed even more on Beardsley and by lap 22 the two were side-by-side for the lead. Sandercock would make an incredible move on lap 23 down the backstretch splitting the lapped cars of T.J. Downs and Cory Lawler, while passing Beardsley for the top spot.

While most eyes were fixed on the change for the lead, Waters made the pass of Homan for third. Even though it took place seven seconds behind Sandercock, the pass would turn out to be huge as one lap later Beardsley spun trying valiantly to catch Sandercock in traffic after 23 consecutive non-stop laps. Beardsley was awarded the TBM Brakes “Tough Brake of the Night”.

The spin by Beardsley put Waters alongside Sandercock for the double-file restart, and surprising to most, the high-flying Sandercock chose the bottom. That would prove to be costly as Waters stayed even with Sandercock down the frontstretch, ripped the cushion in turns one and two, and carried the momentum off the top charging into the lead for what would turn out to be the winning pass.

“We tried some stuff in that dash and obviously it didn’t work,” explained Waters who fell from the pole to sixth in the dash. “We went right back to our normal stuff and kind of threw the kitchen sink at it. This place is kind of different. People say they’ve been on slick- this got pretty slick. After we tore the fender off in the heat race, everyone pitched in and my crew is why we’re here. Without them, I’d have loaded it up in the trailer. They were the ones that won the race, I was just the guy that had the fun time going around there. I have to thank Dale LeBarron. He owns all this stuff. He’s the reason I can do this.”

Parkhurst, who was making his first career Sweeney Tour start, passed Sandercock on lap 27 to finish second after starting 11th! “I found bite on the outside and this thing hooked right up and I liked it,” stated the 36-year-old Fulton, NY driver, who earned $1,000. “I was just praying Waters took the outside on that last restart because this thing worked so well on the outside and got through traffic pretty good.”

Sandercock dropped to a disappointing third. “I took the inside on that restart thinking I’d get a good run off turn four but John (Waters) had a good run and good car,” described the 31-year-old Belleville, Ontario, Canada racer. “Good job to those guys- they work hard day in and day out. This wasn’t the finish we thought we were going to have. We got into the wall off turn four and the car didn’t handle quite the same. We lost half the spoiler and banged the front end in a little bit. All in all I was happy to finish the race.”

Cook was fourth in his first ever Sweeney Tour race. Brian Knowles raced from ninth to a solid fifth improving on his 10th place finish in his 2018 Sweeney Tour debut at the last event at Tri-City. Dale Caswell was sixth. Homan faded to seventh. Adam Ferri was eighth for his third top nine finish in the past four events. Points leader, Jeremy Wonderling, struggled all night to find speed, but salvaged a ninth place effort over Bret Belden.

Like Wonderling, Genco also struggled most of the night to find speed, but did rally from his 22nd place starting position to 11th at the finish to receive the $100 Precise Racing Products “Pedal Down” Hard Charger gift card. Jon Rivers was selected as the Dirt Defender “Defensive Drive of the Night” recipient for holding off Alan Chapman for the sixth and final transfer position in the last chance B main.

“We have to thank promoter Jimmy Phelps and owner Al Heinke for not only giving us the opportunity to bring RUSH to Weedsport but also being able to have our first televised event by MAVTV/SpeedSport.TV,” stated RUSH Director Vicki Emig. “Weedsport is just a truly incredible facility that everyone needs to experience. It was a tremendous atmosphere with a packed grandstands, and we’re hopeful for more opportunities in the future. We also have to thank our sponsors that made the television broadcast possible.”

The Sweeney Tour will resume action on Wednesday, July 11 at Expo Speedway part of the annual Trumbull County Fair races. Race #9 of the 2018 season will be a Platinum Event paying $1,500 to-win. Racing starts early at 6 p.m. due to no lights. The RUSH Sportsman Modifieds will also be part of the show in a Bicknell Racing Products Touring Series event.