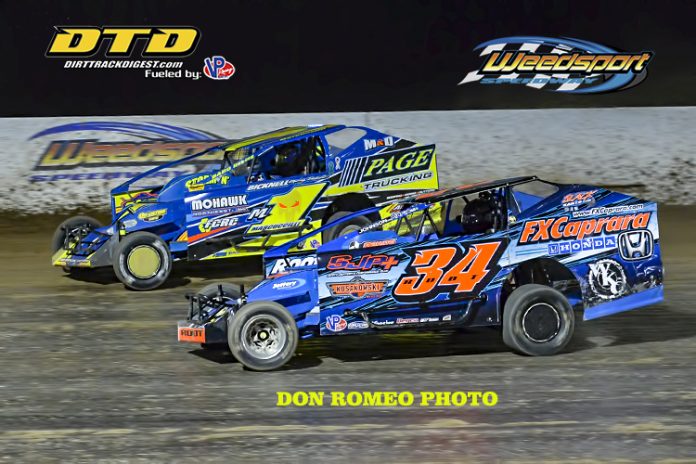 WEEDSPORT, NY – Dave Marcuccilli won the battle Sunday night at Weedsport Speedway, but Kevin Root won the weekend war as the Spano Container Sportsman Shootout Series competed on back-to-back nights as a part of Hall of Fame Weekend at The Port.

Henry scored finishes of third and fifth to earn a $300 bonus while Matt Guererri took fifth and fourth for a $200 bonus.

Sunday’ fifth Spano Container Sportsman Shootout Series event of the season saw Marcuccilli and Root, the series point leaders, start on the front row by virtue of the redraw with Root claiming the early advantage in the 25-lapper.

In search of back-to-back wins, Root ran away at the drop of the green ahead of Marcuccilli, Henry, Guererri and Nick Krause before Kyle Inman worked into the top five before lap 5.


With Root and Marcuccilli running their paces out front, a tremendous battle from third to tenth was being waged with Krause eventually washing high on the back straight and tagging the outside wall. Krause continued for a lap or two, before eventually slowing to draw the night’s first caution before heading to the pit area at lap 10.

Marcuccilli came alive after the restart, wheeling his No. M1 to the outside of the Weedsport oval to steal the lead at lap 13 from early leader, Root. Once out front, Marcuccilli quickly dropped back to the bottom of the speedway and began to motor away.

Like Marcuccilli, Henry also took advantage of the restart to slide into third, but on lap 19 the Henry No. 21H washed high, losing that ground and falling back to sixth position.
As the laps ticked away it was all Dave Marcuccilli out front, as he raced away to claim his third Weedsport win of the season in a one caution event.

Root held on for second in the No. 34 ahead of Inman in third, fourth running Guererri and Henry, who came back to steal fifth at the finish.

Once on Victory Hill, Marcuccilli commented that the high side was the only way he could have claimed the win.

“After the restart it looked like Kevin (Root) was getting looser and looser,” said Marcuccilli. “The outside was really the only place I could go. We were lucky and had just enough to get him there. I went right back to the bottom after and just hope I didn’t see anyone else. The car just got better and better as the race went on.”

A total of 42 DIRTcar Sportsman were in the pit area on Sunday with Gill, Cleveland, Marcuccilli, Root, and Krause winning heat races. B-Main wins went to Tony Finch and Greg Doust.

On Saturday night Root topped a field of 24 DIRTcar Sportsman competitors in dominating fashion, taking the lead on lap seven from Henry and never looking back.

The event was slowed three times in the first eight laps, including a tangle between race leaders Henry and Steve Gray. The tangle would see Gray spin to the top of the track in turn one, with Henry continuing on.

From there the race went green to checkered over the final 17-laps with Giguere, Henry, Schilling, and Guererri chasing Root across the finish stripe.

Root celebrated his first Weedsport win with his family on Victory Hill.

“I have to thank everyone who helps us,” said Root. “We started the year really good, then fell off a bit and now have this car running great again. It was so maneuverable tonight, we could go anywhere.”

For tickets and more information visit online at www.weedsportspeedway.com.