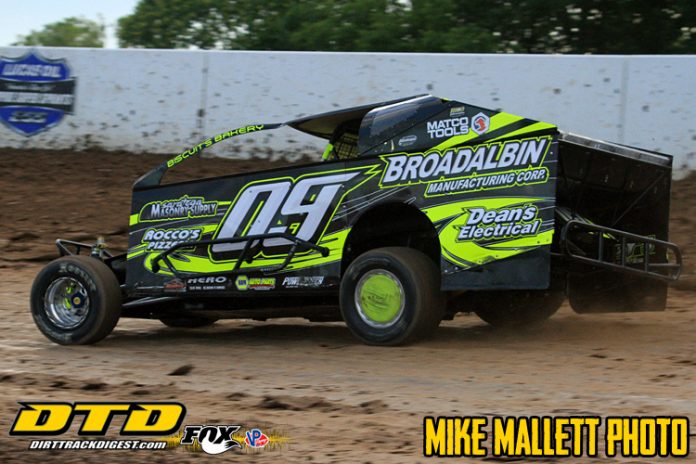 WEEDSPORT, NY – The Spano Container Sportsman Shootout Series returned to Weedsport Speedway on Sunday, joining the ESS Legends Reunion with Connor Cleveland showing the way in a tremendous battle with Zach Sobotka, to score his second win of the season at the Port worth $1,000.

Cleveland took advantage of a stout qualifying effort and redraw to start from the outside of the front row with DJ Forbes, darting to the lead from the drop of the green, never looking back.

From there, Cleveland held off Sobotka on a late race restart to claim the win by just .555-seconds.

“I knew if I gave him a run at me on the last restart, he (Sobotka) might get me,” said Cleveland. “The car was awesome all night. We made a lot of adjustments that really worked and the car was on rails. I had good side bite all night and great drive off, so I knew if I stayed on the bottom, then came across to take his line away, he wouldn’t get me.”

Forbes and Cleveland led the field to the green on Sunday with Cleveland rocketing to the point in the No. 09 with Nick Krause initially following into the runner-up spot in the No. 24K

The night’s first caution would wave on lap 2 for Henry Desormeau, who spun in turn one. A quick turn around saw the green lights come back on with Cleveland and Krause checking away in the lead, however it was Marcuccilli charging through the pack early from ninth position to take fifth.

Following a lap eight caution for Austin Germino, the race began to fall into its paces with Cleveland continuing to be in charge at the front. Further back Gill was starting to move forward in the No. 60, sliding by Marcuccilli for fourth on the restart.

As the race pushed on it was clear that Cleveland was the favorite, but Sobotka and Krause were showing signs of improvement as they pulled away from both Gill and Marcuccilli.
With less than ten laps to go Krause was really coming alive, looking to the outside of the race track for a way by Sobotka into second. But, two consecutive cautions on laps 19 and 20 slowed that momentum with a five-lap shootout left for Cleveland, Sobotka, Marcuccilli, Krause, Guererri, Gill, Barker, Root, Power and Stanton.

Seeing his chance at a win, Sobotka hammered the outside of the race track for five consecutive laps looking for a way by the No. 09, but it wasn’t meant to be as Cleveland charged to the win.

The Spano Container Sportsman Shootout Series will conclude on Wednesday, October 3 with the Super DIRT Week Kick Off Party featuring the DIRTcar 358 Modified Series and the DIRTcar Sportsman Series.

Poirier took advantage of a faltering Lucas Wolfe, who led in the early going.