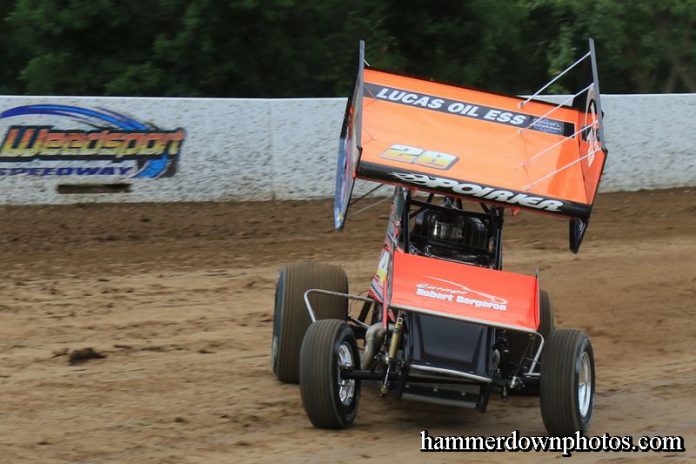 WEEDSPORT, NY – Steve Poirier won his fourth Lucas Oil Empire Super Sprints (ESS) A-Main of the 2018 racing campaign which extended his all-time win total to 69. While he was fast, he did admit a little luck was on his side to claim the $2,060 victory over Chuck Hebing and Jason Barney.

The two moments that helped Poirier to claim the NAPA Auto Parts US Tour and E&V Energy I90/I81 Series event was when leader Lucas Wolfe had a spud break on his magneto while leading on lap 17 and when Dave Farney displayed the two to go signal the motor began to stumble. Poirier was running low on fuel.

The Quebec star did draw the pole for the Mach 1 Chassis A-Main and lead to a lap three restart when Wolfe went around the outside. “I had a real good car and was comfortable running in the middle in one and two until Lucas drove around the outside of me, so I knew I had to change my mine,” said the multi-time ESS champion, “I was closing in on him in traffic and was going to try to make a move and all of a sudden he slowed on the track. It was going to be interesting but he had the bad luck.”

After the caution for Wolfe, it put Hebing in second and he put the pressure on Poirier. The closing laps saw the familiar #28FM on the cushion with Hebing trying different lanes.

“I was good on the top after that and I was going to stay there. Then all of a sudden the motor started to stumble,” Poirier noted, “I was letting off a little bit to make sure it would make it to the finish but it was tough to do as the track was so racy and you didn’t know what they were doing behind you.”

Hebing did close in on the final laps but fell just a few car lengths short. For Poirier, it was another podium finish and the plans are to go for the championship. “We were going to decide after Can-Am and we said let’s give it a shot. I don’t feel any pressure as we didn’t plan on it in the beginning of the season. We will see if we can come out ahead of Jason and Coleman,” he went on, “If we do it will be pretty cool, if we finish second or third we will be ok with that as well as we didn’t plan on running for it.”

The runner-up finish for Hebing added another to a long string of podium finishes as of late. “This car just has been so good lately,” he simply said, “We ran the top hard during the heat and I didn’t know if Steve so that as he was hard up top in the feature. We tried some different moves but just ran out of time.”

For Barney, the third place finish was his first podium finish in a few races which kept Poirier and Gulick at bay in the points. “It feels good to get some speed back. We want to be a few positions higher but top three with Steve and Chuck is a good outcome,” said the defending ESS champion, “We are happy to put on a good show for our sponsors who were in the stands tonight. It was an important night for us and hope they had a good time.”

A total of 34 sprints filled the pits on the Legends Reunion night at Weedsport. Earlier in the afternoon, Tom Taber and Bobby Parrow had their plaques officially hung on the wall in the Dirt Motorsports Hall of Fame.