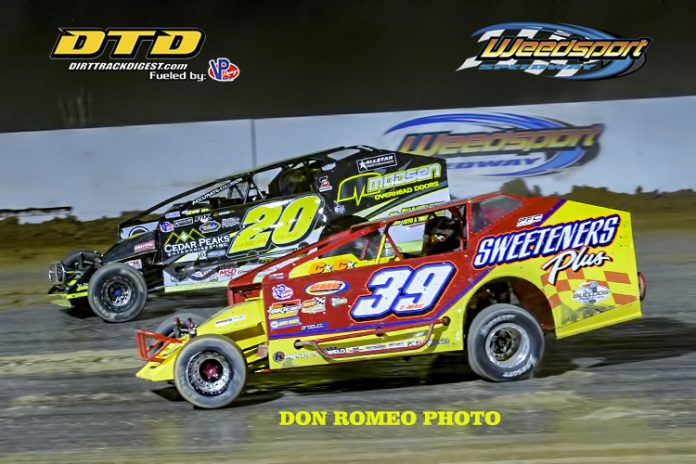 WEEDSPORT, NY – With the support of Rochester based Stirling Lubricants, Weedsport Speedway’s Super DIRTcar Series Big Block Modified Labor Day 100 purse has received a shot in the arm, now paying $8,000 to the winner with $700 to take the green along with a stout B-Main payday.

Originally scheduled to pay $7,500 to win, with another guaranteed starting spot for the NAPA Auto Parts Super DIRT Week Billy Whittaker Cars 200 on the line, Stirling Lubricants has ramped up Weedsport’s third Super DIRTcar Series show to an even $8,000 to win.
Additional support guarantees that all drivers taking the green flag in the Labor Day 100-lapper will also earn a cool $700, providing a balanced pay structure top to bottom.

“Weedsport Speedway was founded on the strength of Dirt Modified racing in the northeast, and it is our goal to do our part to help preserve that strength,” said Weedsport Speedway promoter, Jimmy Phelps. “We are proud to announce this purse increase with the help of Stirling Lubricants, and feel strongly that a well-balanced pay structure is the key to the success of the Super Dirt Car Series and its competitors.”

With 36 or more entries, the night will include a B-Main for non-qualified cars with the top five finishers earning a pay day. The winner of the B-Main can either walk away with $800 or take the 31st starting position in the Labor Day 100.

With 35 entries or less, all non-qualified cars will earn $200 tow money.

Joining the Big Blocks on the main bill will be the 360 Sprint Car Open with some of the best winged sprint racers in the area returning to Weedsport yet again.

The ‘Labor Day Double Play’ will be the second winged 360 Sprint Car race of the season at The Port.

Roy and Beauchamp each have one feature win on the season joined by Bruno Cyr, Chuck Dumblewski and Rick Duzlak.

Pit gates will open at 3 p.m. on September 3 with grandstand gates opening at 4 p.m. Qualifying will hit the Speedway at 5:40 p.m. with opening ceremonies set for 6 p.m.

General admission seating is available on September 3 for $25, with reserved seating set at $29. Reserved seat purchases by August 30 will earn a FREE fan pit pass.

For a full 2018 Weedsport Speedway schedule and detailed information on the ‘Labor Day Double Play’ be sure to visit online at www.weedsportspeedway.com. Fans can also FOLLOW on Twitter @WeedsportSpdwy and LIKE on Facebook at www.facebook.com/weedsportspeedway.