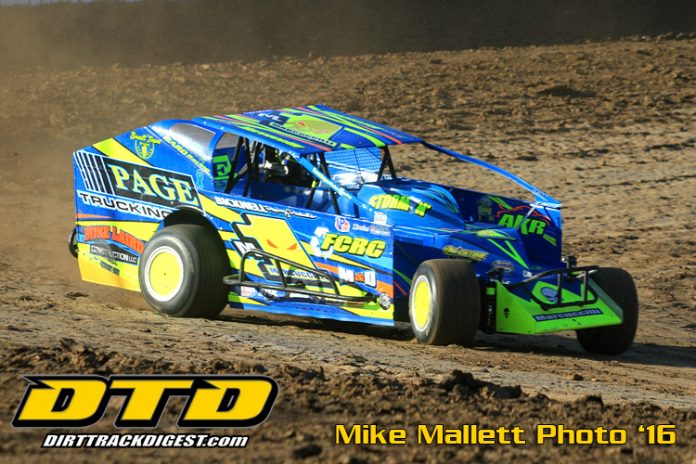 WEEDSPORT, NY – More than 100 DIRTcar Sportsman drivers have taken on Weedsport Speedway in 2018 with Dave Marcuccilli leading the way in the Spano Container Sportsman Shootout Series after six point paying events, with a champion officially being declared during the Wednesday, October 3 Super DIRT Week Kick-Off, presented by Ferris Industries.

Cleveland has four top five finishes along with his two wins, with his latest coming in August as he visited Victory Hill as a part of the ESS Legends Reunion.  The victory catapulted Cleveland to the runner-up position in the championship, moving ahead of Kevin Root.


Root has come into his own this season, racing his way to the front in nearly every event this year.  Five top fives and six top tens in six point events have Root engaged in a tight battle with Cleveland and Matt Guererri for second in the championship.

Trailing Cleveland by only five points, Guererri could easily surge to second in points with a stellar run in Weedsport’s Super DIRT Week finale on Wednesday, October 3.

Finishing the top five in points after six events is Zach Sobotka.

Sobotka nearly pulled off a win in August, but fell short to Cleveland.  Since May 20, Sobotka has tallied two top five finishes and four top ten runs to trail Guererri by 49-points for fourth in the championship.

Defending series champion Kevin Ridley joins Marcuccilli, Cleveland and Root as a main event winner this season.  However, after winning the opening night feature on May 20, Ridley has struggled and has only started four of seven total events during the year.

The final event of the Spano Container Sportsman Shootout Series will take the green as a part of the Super DIRT Week Kick Off Party at Weedsport Speedway presented by Ferris Mowers on Wednesday, October 3.  The event will also be part of the DIRTcar Sportsman Series Fall Championship schedule.

Pit gates will open on October 3 at 4 p.m. with grandstand gates opening at 5 p.m. and opening ceremonies set for 7:30 p.m.

Free fan pit pass upgrades are not available for this show.

The Super DIRT Week Kick-Off Party, presented by Ferris Industries, will start pre-race as Cortland, NY based country music band, Small Town Shade, will perform before the action begins in the Weedsport Speedway Midway from 5-7 p.m.