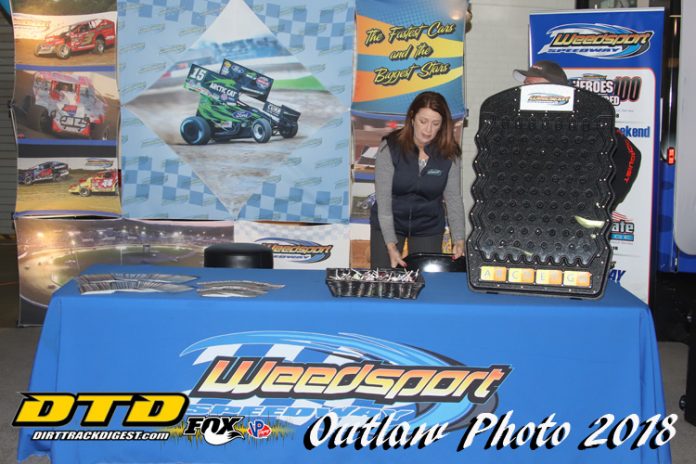 WEEDSPORT, NY – Weedsport Speedway will unveil a truly diverse show display as part of the 33rd annual Syracuse Motorsports Expo held inside the Center of Progress Building within the New York State Fairgrounds on March 9-10.

The back drop of the display will once again be anchored by the Weedsport Productions truck, which houses the speedway’s mobile production lab and will be the nervous center for a LIVE edition of Off Track TV during the Motorsports Expo on Saturday, March 9 beginning at 3 p.m.

Ahead of the productions truck will be displays for both Weedsport Speedway and Weedsport Kartway.

The Weedsport Speedway display will surround the No. 45 sprint car of Chuck Hebing, Erick Rudolph’s No. 25 big block modified as well as the No. 10 Honda CRF450R flat track bike of AFT rider, Austin Luczak.

Luczak, an AFT singles competitor and an active member of the US Army, is from Albion, NY and will be on hand to meet with fans and to sign autographs during the show.

The Weedsport Kartway display will feature the No. 00M Slack Karts machine of Dan Kapuscinski and will also provide schedule cards for the 2019 kartway season.

Competitors visiting the Weedsport Kartway booth will be able to pick up 2019 rulebooks as well as register for the upcoming season, which opens on Sunday, May 26.