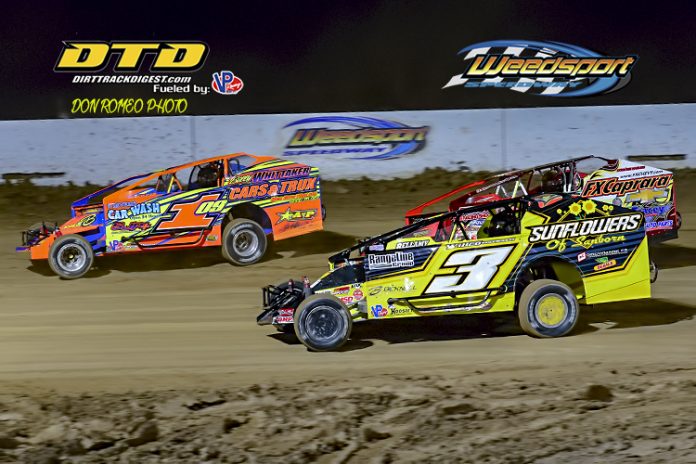 WEEDSPORT, NY – The sights, sounds and smells of racing season will officially hit Weedsport Speedway on Sunday, May 5 for The Port’s annual test and tune session, beginning at 2 p.m.

The May 5 test and tune is available to all dirt track racing divisions, not just those competing during Weedsport’s 2019 calendar of events, as long as cars meet the minimum safety requirements.

Pit and grandstand gates will open at noon on May 5 with grandstand admission free to spectators.

Pit admission will be set at $20 for the day.


The CNY Chevy Dealers Pavilion and concession stands will be open for the afternoon for fans to enjoy while watching cars in action as they get their first look at a few new adjustments made to the Speedway’s racing layout.

“We basically reshaped the flow of the track slightly,” said Weedsport Speedway promoter, Jimmy Phelps.  “We took some time this off-season to reshape the entry of turns one and two, just to the apex of the corner.  We also moved the barriers in a touch in corners one and four, just to open up the front stretch a little bit more.  The overall goal was to make turns one and four wider, safer and a bit more prone to two wide racing.  I think it is going to turn out well.”

The test and tune session will serve as a perfect setting to get settled back in and prepare for an exciting 2019 racing calendar that will get the green flag during the month of May.

Camping and tickets are currently available online at www.weedsportspeedway.com.  Click on the “Tickets” tab at the top of the screen to learn more.