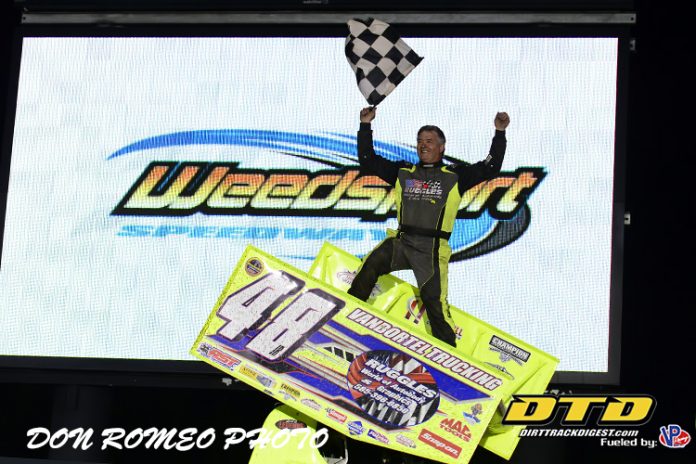 Susice started just his second DIRTcar Sportsman main event at Weedsport on Monday and made the most of it wheeling his No. 81 machine.  Susice led all 25-laps of the first Sportsman event of the year at Weedsport, beating out veterans Jackson Gill and Kevin Root for the $1,000 pay day.

Starting from the outside of row one, Susice slid by polesitter Gill on a complete restart to snag the top spot, a lead he would never relinquish once out front.

Root utilized the outside of the speedway in the early going and looked as though he would be a winning contender in the middle stages of the race.  However, once he tucked in behind Susice and Gill at the front of the pack, he had little left in a bid for the victory.

AJ Miller and Alan Fink battled hard inside the top five for the majority of the event with Matt Janczuk charging to a sixth-place finish ahead of Matt Guererri, Brandon Ford, Steve Gray and Andrew Smith in the top ten.

Consolation events went to Will Shields and Jessica Power.

The next Sportsman event at Weedsport will be the prestigious and lucrative Sportsman Classic presented by Stirling Lubricants and Champion Racing Oil on Tuesday, July 2.  The DIRTcar Sportsman Series event will again pay $2,500 to the winner of the 75-lap special.

Daryl Ruggles was the big winner in the 24-car CRSA Sprint Car main event on Monday.

Weedsport Speedway’s next event is the All-Star Showcase featuring Tony Stewart and the All-Star Circuit of Champions 410 Sprint Cars along with the Stirling Lubricants/Champion Racing Oil Big Block Modifieds.

Pit gates will open on June 9 at 4 p.m. with grandstand gates swinging open at 5 p.m.  Racing action is slated to take place at 7 p.m.

Reserved camping is available for $30 with general camping marked at $24.  Camping in The Great Outdoors RV Campgrounds now includes a host of amenities including all-new shower and restroom facilities.

Tickets for the June 9 All-Star Showcase are available online at www.weedsportspeedway.com.