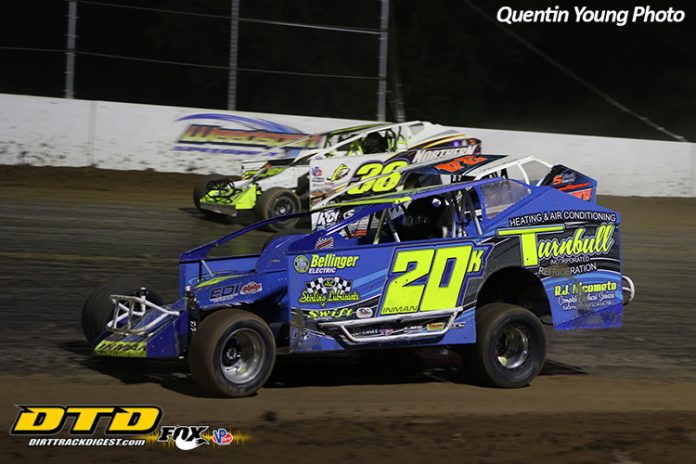 Inman started the 25-lap, $1,000 to win, main event from the fourth position and managed to sneak underneath early leader Sobotka in lapped traffic with a three wide move on the front stretch at the completion of lap 16 to take the top spot.

Not even a lap later, Cody Wolfe spun in front of the leaders in turn three causing Inman, Sobotka and Root to scatter for racing room. Despite slight contact by Root, all were able to continue on in a fantastic piece of driving.

Over the course of the final laps Inman proved to be too strong as he drove to victory over Root, Sobotka, AJ Miller and Robbie Johnston in the top five.

The win was Inman’s 11th overall DIRTcar Sportsman win of the season and his first career victory at Weedsport Speedway.


“That was wild,” said Inman on Victory Hill. “Neither Zach (Sobotka) or Kevin (Root) give up easy. They got bottled up there and luckily I came out on the right side of it. It is difficult to keep bite here off of turn two, you have to change your lines up quite a bit and keep the door shut. The track was amazing tonight.”

Sobotka and Root brought the 25-car Sportsman field to green on Sunday by virtue of the re-draw with Sobotka gaining the early advantage in the No. 38.

Inman quickly found the runner-up position on lap 2 and from there it was a four car race out front as Sobotka led Inman, Root and Miller in the early going.

As the race approached the halfway point Sobotka, Inman and Root were clearly the three cars to beat, but that appeared to be in jeopardy after Inman stole the lead on lap 16.
A spinning Wolfe nearly collected all three leaders in turn three, but somehow everyone managed to make it by and would be able to restart in their current positions.

After the restart Root knew it was time to go and slid by Sobotka for second on lap 18. With only seven laps remaining, Root was now giving full pressure to Inman out front.
Two more cautions in the race’s final laps gave Root restart opportunities on Inman, but it would not be enough as it was Inman’s night in the No. 20K.

A total of 25 DIRTcar Sportsman were in the pit area on Sunday with Inman, Miller and Sobotka winning heat races.

The DIRTcar Sportsman will return to The Port for Weedsport’s next event, which will be the ESS Legends Reunion on Sunday, August 11 featuring the Empire Super Sprints and the DIRT Modified Nostalgia Tour. Learn more on the speedway’s events page at www.weedsportspeedway.com.