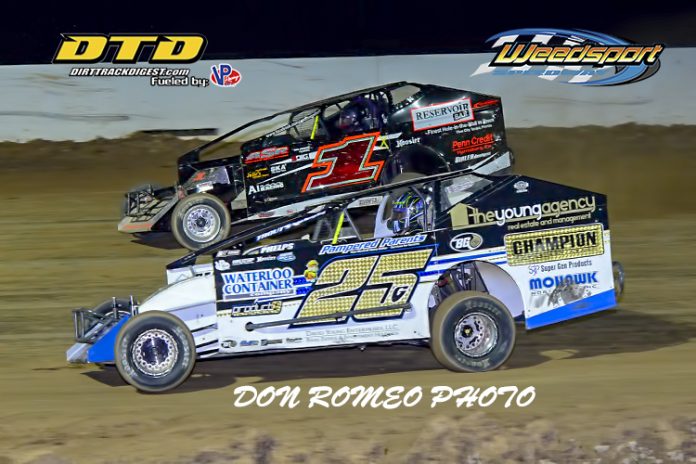 WEEDSPORT, NY – Nick Guererri made all the right moves on Sunday night at Weedsport Speedway, winning his qualifying heat race, re-drawing the pole position and leading 24 of 25-laps on his way to victory in the night’s main event powered by Pit Stop Convenience Stores.

Guererri held off the advances of Andrew Smith and Austin Germinio to claim the victory.

“Man, this is unbelievable.  We just won at Weedsport,” said Guererri on Victory Hill.  “I could see a couple times that someone was out there, but we were getting through the holes pretty good on the bottom and I was just hoping the lapped traffic would stay to the outside.  This is a big win for us.”

Germinio had a great drive in the second half of the race to take second ahead of Bob Henry Jr., Smith and Zach Sobotka in the top five.


Guererri and Smith brought the 24-car DIRTcar Sportsman field to green on Sunday with Smith gaining the initial edge in his No. 1X machine.

However, Guererri was digging hard on the bottom of the speedway right from the drop of the green flag and would best Smith low out of turn four to lead lap 2.

From that point Guererri asserted himself as the car to beat as Sobotka and Germinio started to make moves further behind.

As Sobotka and Germinio slid through the field, Guererri led the way.  But, by lap 12 Germinio had found his way by Smith for the runner-up spot and looked as though he could contend for the lead.

Germinio would get help on lap 12 as the yellow lights came on for a slowing Colby Herzog.  The caution bunched the field with Guererri leading Germinio, Smith, Sobotka, Henry, Gray, Root, Matt Guererri, as well as Zach and Alex Payne.

With green lights back on at the halfway point, Germinio was hustling the outside of the speedway with conviction.  On more than one occasion it looked as through the No. 10G may be able to take advantage of the Guererri No. 25G, but Guererri proved to be too good on the low side of the race track.

As Guererri and Germinio held their battle up front, Henry was making headway in the No. 10J.  With six laps to go, Henry moved by Smith to take third, but there would be no more cautions in the 25-lap event to allow Henry a chance at the lead.

When the checkered flag fell it was all Guererri and Germinio up front, with Guererri making the trip to Victory Hill.

A total of 26 DIRTcar Sportsman were in the pit area on Sunday with Alex Payne, Nick Guererri and Root claiming heat race wins.

The next DIRTcar Sportsman event to take place at Weedsport Speedway will be on Wednesday, October 9 alongside the DIRTcar 358-Modified as part of the Super DIRT Week Kick-Off.  Details are posted to the events page on www.weedsportspeedway.com.

Weedsport Speedway’s next event will be the Rally at the Port Classic Car Show on Saturday, August 17.  Learn more on the speedway’s events page at www.weedsportspeedway.com.