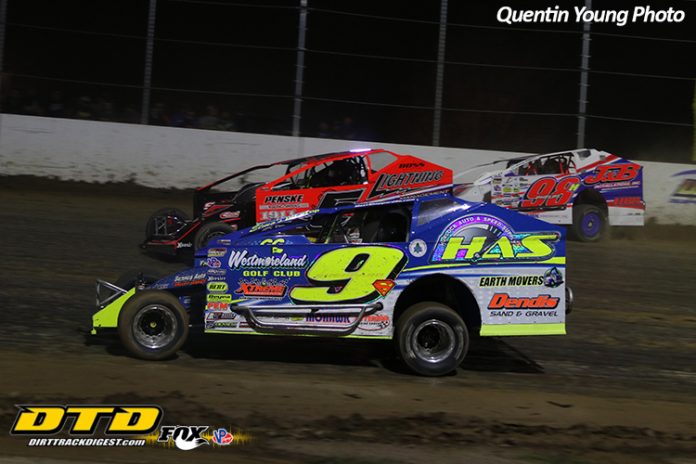 WEEDSPORT, NY – The final leg of Weedsport Speedway’s Champion Oil Modified Series presented by Stirling Lubricants will pit the best Modified drivers in the region against one another on Monday, September 2 in the Lane’s Yamaha Labor Day Double Play, led by none other than, ‘Super’ Matt Sheppard.

Sheppard has scored more than 30 wins this season, including two at Weedsport, leading Erick Rudolph by a slim 2-point margin heading into the $7,500 to win Labor Day 100 for the Super DIRTcar Series Big Block Modifieds.

In the series last stop to Weedsport, Sheppard dominated the Hall of Fame 100, covering a stout field of Super DIRTcar Series combatants.

Sheppard’s fantastic 2019 season to date sees the driver of the No. 9S continue to lead the Super DIRTcar Series standings having notched six tour wins, while also recently securing his ninth career track championship at the Land of Legends Raceway.

Rudolph, who has one win at Weedsport in 2019, will look to overcome Sheppard in the Champion Oil standings during the Labor Day 100, as they each eye the overall championship prize of $2,000.

Jimmy Phelps currently sits third in the Champion Oil Modified Series points, only 10-markers behind, with Chris Hile and Larry Wight in the top five.

The full cast and characters of the Super DIRTcar Series Big Block Modified tour will be on hand Monday, September 2, as the Big Blocks will be paired with the ESS Sprint Cars and the DIRTcar Pro Stock Series for the Labor Day Double Play.

Pit gates will open on Monday at 3 p.m. with grandstand gates swinging open at 4 p.m. Racing will get underway at 6 p.m.

Advance purchase reserved seating is available through August 29. Reserved tickets are $32 and include a FREE Fan Pit Pass if purchased by August 29.

For more information and tickets, visit www.weedsportspeedway.com. Be sure to LIKE Weedsport Speedway on Facebook and FOLLOW on Twitter @Weedsportspdwy.
About Weedsport Speedway: Officially opened for the first time on July 24, 1955 – the Weedsport Speedway 3/8 mile dirt oval has produced a legendary list of drivers and champions including Will Cagle, Danny Johnson, Bob McCreadie, Alan Johnson, Jack Johnson, and Dave Lape to name a few. In 2018, Weedsport introduced the all-new Weedsport Kartway, just outside of the Speedway’s main pit area, to begin to foster the next generation of racers, crew members and race fans. Together, Weedsport Speedway and Kartway are excited to bring fans and followers a schedule of 15 racing events in 2019, hosting everything from Karts and Sprint Cars, to Late Models and Modifieds, Pro Stocks and Micro Sprints, even Flat Track Motorcycles. Couple the racing with state-of-the-art camping and track amenities, unmatched on-site television production capabilities, plus the ability for large scale concert productions and Weedsport is one of the marquee entertainment venues in the country.