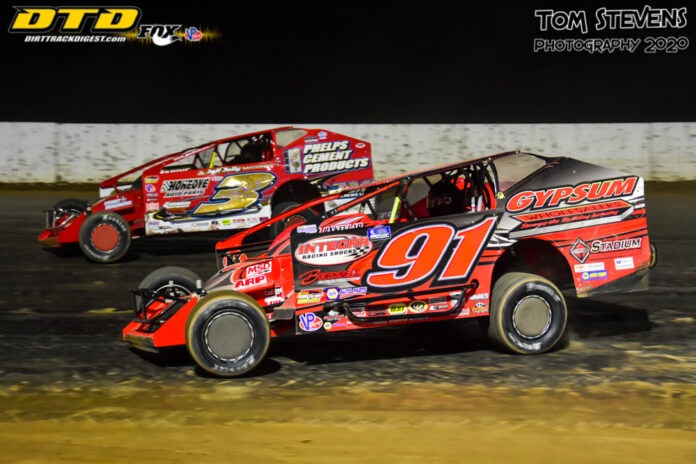 WEEDSPORT, NY – Weedsport Speedway is set to return to racing action in 2021 with a nine event schedule slated to begin on Sunday, May 30 with the Super DIRTcar Series Heroes Remembered 100.

The Super DIRTcar Series Modifieds will be just one of ten different sanctions to compete at The Port this season, including the return of the World of Outlaws NOS Energy Drink Sprint Cars on Saturday, July 31.

“As we inch closer to spring, we are excited to feel as though we can finally put some firm focus toward racing in 2021,” said Weedsport Speedway promoter, Jimmy Phelps.  “We have been fortunate to schedule a good mix of exciting divisions and series across a packed nine event schedule and we are eager to welcome fans back to Weedsport as soon as we can.”

Weedsport Speedway was one of several facilities in New York State to remain shuttered during the majority of the 2020 season due to the COVID-19 pandemic.  Only DIRTcar’s OktoberFAST saw action at Weedsport last season with Max McLaughlin, Kevin Root and Nick Stone reaching Victory Hill.

In 2021, the Super DIRTcar Series Heroes Remembered 100 will kick things off on Sunday, May 30 alongside the DIRTcar Sportsman and the CRSA Sprints.

The month of June will be highlighted by the 7th running of the prestigious DIRTcar Sportsman Series ‘Sportsman Classic 75’ on Sunday, June 13, joined by a Big Block/Small Block Modified Shootout and 600cc Micro Sprints.

The Fourth of July will be fast and furious at Weedsport as the ESS Sprint Cars will round out their CNY Speedweek on Sunday, July 4 with a trip to Victory Hill on the line.  The winged sprints will be paired with Big Block Modifieds.

The Super DIRTcar Series Modifieds return on Sunday, July 25 with $10,000 in their grasp as part of the Hall of Fame 100.  The DIRTcar Sportsman and Vintage Mods will make for a trio of action on July 25.

Less than a week later the World of Outlaws NOS Energy Drink Sprint Cars will make their triumphant return to Weedsport on Saturday, July 31, paired with the DIRTcar 358-Modifieds.

August belongs to the two-wheeled stars of American Flat Track as the series will hold a special AFT Bike Night and Media Special on Friday, August 13 before returning to the 3/8 mile oval on Saturday, August 14.

Now over a year in the making, Cavalcade Cup Weekend will finally see the green flag on September 11-12 with two nights of Super DIRTcar Series Modified action in conjunction with the DIRTcar Sportsman, DIRTcar Pro Stocks and the ESS Sprint Cars.

Saturday’s opener will see a 50-lap SDS main along with Sportsman and Pro Stocks, while Sunday will feature the 100-lap SDS finale, the ESS Sprints and the Sportsman Challenge Invite special.

Tickets and camping details for events are expected to be finalized in the coming weeks with purchasing anticipated to open in late spring.