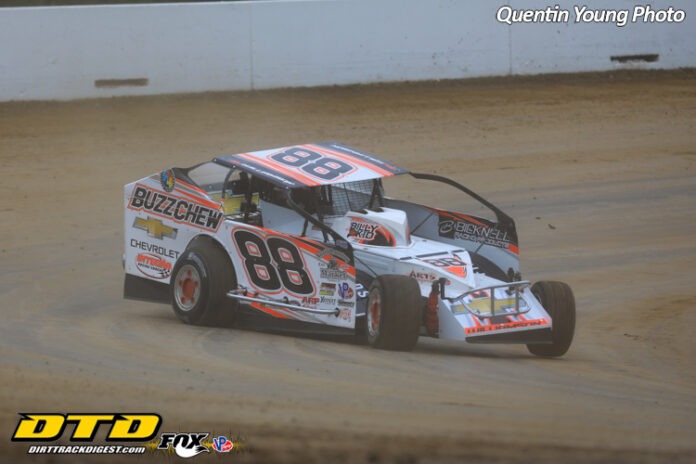 WEEDSPORT, NY – Mat Williamson arrived at Weedsport Speedway on Sunday looking to build on the momentum gained from his Heroes Remembered 100 win at the speedway on Sunday, May 30.  Williamson did that and more, dominating to lead every lap of the night’s 35-lap main event to score $2,500.

Williamson started on the outside pole position, alongside Danny Johnson, and quickly cut to the lead in the Buzz Chew Racing No. 88 and was never again challenged for his second consecutive Weedsport victory.

Williamson was trailed at the line by Johnson, Matt Sheppard, Tim Fuller and Kevin Root.

“There was a lot of good competition here tonight,” said Williamson atop Weedsport’s Victory Hill.  “This Buzz Chew car is just working really well here right now.  It feels good to keep the momentum going with this race car.”

When the green flag fell over Sunday’s 20-car field, Williamson made it known immediately that his Buzz Chew ride would be the car to beat, slicing to the bottom lane from the outside of row one to take the lead from the Doctor Danny Johnson and his No. 27J.

While Williamson checked away from the field, Johnson was left to his lonesome through the middle stages of the race in second while Fuller, Sheppard and Larry Wight began to position themselves further behind in a great battle.

However, that all came to an end on lap 28 when Wight found himself slowing between turns three and four, with a trip to pit lane.  The caution would move Phelps to the top five in the No. 98H behind Williamson, Johnson, Sheppard and Fuller.

Another caution at lap 32 for a slowing Pat Ward bunched the field one more time for a three lap dash to the finish, but the field was essentially locked in at the front, with the exception of Kevin Root, who managed to find his way by Phelps at the finish for fifth while the No. 98H was searching the top of the speedway for more racing room.

Sunday’s heat races were won by Fuller, Root and Wight.

Williamson’s second consecutive win at Weedsport will give him a 24-point advantage over Phelps in the race for Weedsport’s Modified championship.  Sheppard trails Phelps by a single point in third with Haers and Johnson in the top five positions.

The DIRTcar Big Block Modifieds will return to Weedsport Speedway on Sunday, July 4 for The Port’s next event on the schedule.  The night’s racing will see another triple header, featuring the ESS Speed Week finale for the Empire Super Sprints, as well as the NY6A Micro Sprint tour.

Celebrating Independence Day, a Weedsport style fireworks display will close out the evening.

Tickets are now available for Sunday, July 4 with reserved seating set at $30 and general admission seating for those 18 and up set at $25.

Pit admission for DIRTcar members is $30 with non-member pricing set for $35.

After finishing second in his qualifying heat race, Crisafulli redrew a front row starting spot and quickly sped to the point in his No. 88 machine.

Crisafulli’s biggest competition came by way of the No. 4S of Johnny Smith.  In the closing stages of the 20-lap main, Smith actually managed to steal the lead in lapped traffic, however a caution negated the pass putting Crisafulli back on the hammer for a final green-white-checkered run to the finish.

In the final two laps, Crisafulli again sped away in clean air to earn his first career trip to Victory Hill at Weedsport Speedway over Smith, Nick Groff, Ivan Forney and Timmy Lotz.

The NY6A 600cc Micro Sprint tour will return to Weedsport Speedway on Sunday, July 4 for The Port’s next event on the schedule.  The night’s racing will see another triple header, featuring the ESS Speed Week finale for the Empire Super Sprints, as well as the return of the DIRTcar Big Block Modifieds.