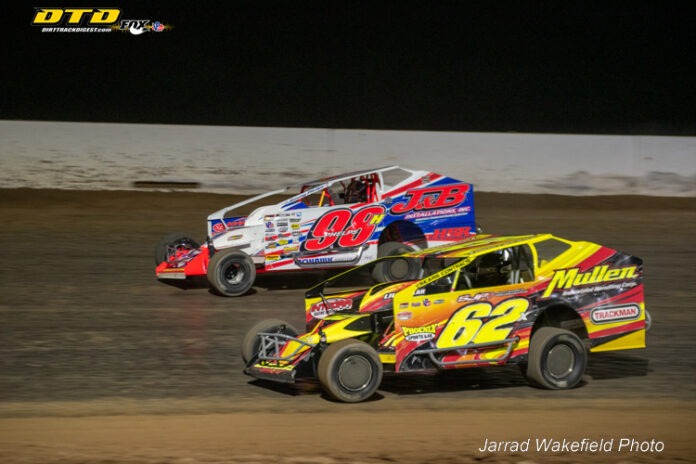 WEEDSPORT, NY – Tim Sears Jr. continued two streaks on Saturday night; winning in the Mullen No.62 358-Modified and running well at Weedsport. Sears Jr. led all laps of the event despite continued challenges from Jimmy Phelps who brought home a solid second-place effort at the track he promotes, with the podium completed by Erick Rudolph.

Sears Jr.’s last three finishes at Weedsport are first, third, and first. It’s safe to say that Sears Jr. is very comfortable around the iconic 3/8ths mile speedway, especially with the heavier track that has been present at the past three events.

“We’re getting quicker with seat time,”  said Sears Jr. “On the Super DIRTcar Series we have been timing better, so we are able to race up front. Taking third last week against Stewart Friesen and Max McLaughlin was great, and the last two wins here have been nice. The more races we’ve ran this year we’ve felt more comfortable and found more speed as we go on. We have Land Of Legends on Wednesday, which isn’t a place we have a lot of track time at but we’ve got the momentum we need.”

Phelps led the field to the green flag, but it would be Sears Jr. who took the lead for good on lap one. Sears Jr. fired off better than Phelps, allowing him to grab the lead around the top-side of the speedway in turns one and two.

While the top two pulled a gap on the competition, racing was chaotic throughout the field. A majority of the night’s action occurred at the back of the field. 358-Modified standouts such as Billy Dunn and Tim Fuller started deep in the field, which added to the mad scramble in the spots around the top fifteen. The racing stayed mostly clean despite a few incidents which somehow did not result in larger accidents. Tommy Collins was almost launched into the outside wall in turns three and four as Chris Cunnigham and Bob Henry Jr. made contact, with Henry Jr. sliding into Collins’ path and launching Collins through the air, however, all three continued without slowing considerably.

The yellow flew soon after, however, as Michael Stanton ended up facing the wrong way at the exit of turn four. On the restart, the status quo continued, with Sears Jr. continuing to lead over Phelps. However, Phelps was not letting the No.62 get away. Phelps started to work a lane above Sears Jr., managing to pull alongside Sears Jr. multiple times. However, Sears Jr. seemed to have too much drive on corner exit, and fended off Phelps’ challenges during the middle of the race.

The last yellow flew late, as Larry Wight and Ben Bushaw came together. Bushaw, having one of his best runs of the season, continued after him and Wight came together in turn two. Wight caught the inside wall as a result of the contact, sending his car into a tank-slapper spin on the backstretch. Wight pulled pit-side, ending his night.

The final restart saw Phelps get very close to pulling ahead of Sears Jr., but it just was not enough. Sears Jr. held off the challenges to grab his second win of the season at Weedsport as he never left the bottom lane in the final laps.

“It’s more racey,” said Sears Jr. “The track gets a few grooves going and you can move around and find speed in every single one of them. We knew that the top would have some bite early tonight, but the bottom still seemed to be quicker overall. Once we got out there with the track blown off from the World of Outlaws, I knew the bottom was where we needed to be. To pass late in the race, you needed to be way faster than the guy in front of you, so running down there would force anyone trying to pass to have to go around up top.”

Phelps was close to stealing the win from Sears in the closing circuits, but just couldn’t get through the corners the way he needed to in order to wrestle the lead away from Sears Jr.

“I got to the outside of of him, but once I got that far up the track I got a little tight,” mentioned Phelps.  “I needed to get the right angle. With him there it was hard to do.  He’s fast; they can’t beat him at Fulton either.  The fact we had a shot makes me believe we had a pretty good car here.”

Phelps was hoping for the opportunity to get a shot in traffic.  It just didn’t happen as cautions slowed the pace each time slower cars were about to come into play.

“I thought our car could move around a little better,” stated Phelps.  “He didn’t venture off the bottom.  I was hoping to get to lapped traffic so we could get racing a little bit.  It seemed like every time we got to traffic the yellow came out.”

Overall, Phelps was satisfied with the night.  He was pleased with his effort in the race, but more importantly, how things ran off as he also wore his promoter’s cap on the night.

“All-in-all it was a good day,” he said.  “It was a great show.  Our minds are a little occupied when we have events like this anyway.  We set out to have some fun with the 98 and we were able to do that.”

Rudolph claimed the final spot on the podium.  Rudolph felt like he didn’t have the speed in order to compete with the top two.

“Not too bad,” commented Rudolph about his night.  “We had about a third place car.  The top two were just better, especially on the longer runs.  They could carry extra speed through the corners that I just couldn’t do.”