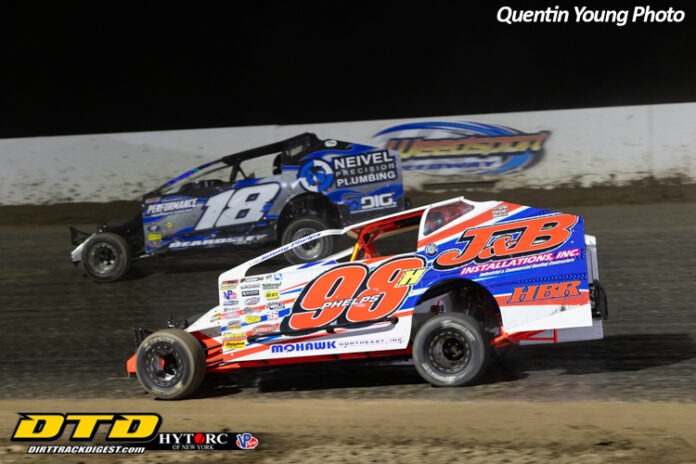 WEEDSPORT NY-Jimmy Phelps had one of those nights that drivers dream of.

He led every lap of his heat, drew the pole for the 35 lap feature and then led every single circuit to run away with the checker at the Weedsport Speedway on Saturday night.

Phelps, running a 358 on rare occasions, made this one count and there was little difficulty in winning the race at the track where he is the General Manager.

On victory hill he said, “The car was unbelievable tonight. I got a bit nervous around lapped traffic, but when I got through this car was a rocket. It was really good.”

Racewise he said, “The car would roll in the middle and top of three and four and gave me the opportunity to pass cars. It was one of those night where we just had good track position.”

While pole sitter Phelps was on cruise control there was nothing but chaos behind him.

When the dust had settled 13th starter Larry Wight had put on a spectacular run for second and the survival of cars from second thru seventh was nothing short of amazing.

At the midway point Phelps had a comfortable edge over Mike Stanton and third place Bob Henry Jr.  with Wight closing rapidly.

As the laps ticked down the action got heated as Wight took advantage of Stanton sliding high and then catching Henry in traffic  to pick up the runner up position with nine laps to go.

Everyone, except for Phelps, needed the yellow that never came.

Max McLaughlin and Billy Dunn joined the group in the battle for third place and the several cars battled side by side, bumper to bumper and wheel to wheel for the closing circuits.

Phelps had a huge more than straightaway lead in the waning laps, but that was reduced considerably by the monumental traffic jam that he confronted. His advantage was reduced to just 2.4 seconds at the checker flag as Wight was doing everything in his power to close the gap.

At the checker Phelps and Wight were followed by McLaughlin, Dunn and Henry completed the top five.

Wight said of his progress through the event, “I was making up time between three and four, but there was not enough in one and two.  I was able to take advantage of Henry when he slipped up a bit”, but second was as far as he would go.

McLaughlin was content with his night as he explained, “I had a good car, but it was tough to pass early. This was the first time I’ve driven a 358 and it took a while for me to get use to it. I felt good with the finish and I felt I could run in the middle okay.”