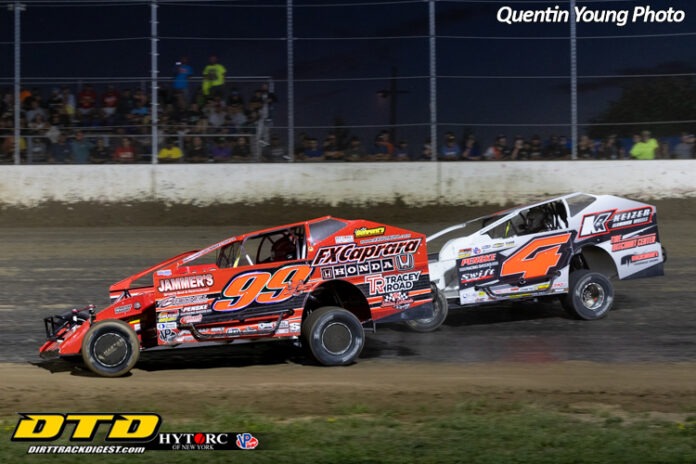 WEEDSDPORT, NY – The fans might have come for the World of Outlaw Sprints, but when they walked out they probably were talking about the non-stop big-block Modified 35-lap feature at Weedsport Speedway on Sunday night.

The line up saw Anthony Perrego and Larry Wight on the front row and Tim Fuller in the third starting spot.

What resulted turned out to be a nail biting, edge of the seat instant classic as Wight eventually won while Fuller passed Perrego at the finish line for second place.

However, it was really two races with the first part basically a run away for the 99L of Wight. Perrego hung around, but was sitting relatively uncontested in second while Fuller ran a steady third.

Chad Phelps and Ronnie Davis were fourth and fifth, but basically ran uncontested for the entire distance

At the halfway point Wight, Perrego, Fuller, Phelps and Davis were unchanged, but movement was behind with Darren Smith in sixth followed by Matt Sheppard, Tim Sears Jr., Jackson Gill, Peter Britten and Alex Payne.

A lap later Sheppard, who started in 13th, was making a move under Smith as the 9s was progressing well through the field. However, the two touched and Matt sustained a right rear flat as he pulled to the infield.

It then got interesting as traffic, due to a low drop out rate, was getting tough.

With 10 laps to go Perrego applied the heat and made a move under Wight in turn two to lead momentarily. Wight quickly recovered and went back to the point.

Over and over again Perrego, who was running solidly through one and two and getting a good run off the turn and down the backstretch, threatened.

Suddenly with seven laps to go there was Fuller on the bumper of the lead duo.

Wight couldn’t get by the lapped car of Sean Beardsley and Perrego was trying to use that to his advantage.

It almost worked until Torrey Stroughtenger got side-by-side with Beardsley and slowed Perrego’s momentum.

With a lap to go Perrego made a last gasp effort at the east end of the speedway.

However, as the trio raced out of four Wight held on and Fuller snuck past Perrego at the finish line for second.

Phelps and Davis rounded out the top five.