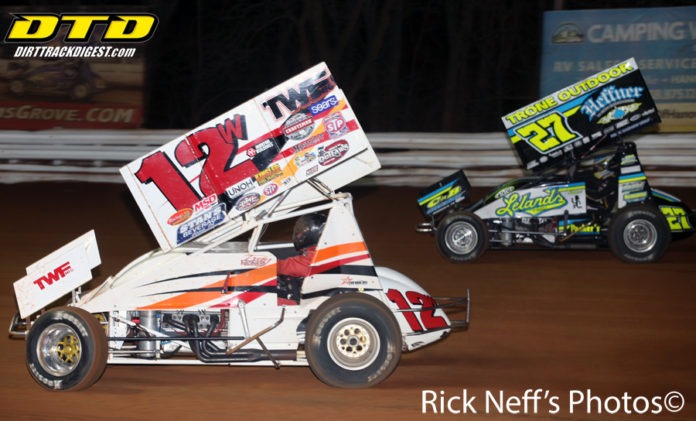 MECHANICSBURG, PA – Greg Hodnett of Thomasville opened up the 2017 Williams Grove Speedway sprint car season on Friday night with a flag to flag victory worth $3,800 over Brian Montieth.

Elsewhere, Gregg Satterlee of Rochester Mills socred the victory in the 25-lap super late model main to record his second career victory at the oval one year after claiming a late model main at the track on the same weekend.

Hodnett drew the second starting spot to begin the 25-lap 410 sprint car feature and outgunned Steve Buckwalter from the pole when the race began.

The first caution flag of the race unfuled with six laps away finding fifth starter Brian Montieth up to third.

Hodnett pulled away on the restart by using the top groove after racing early around the inside lane.


However Hodnett did see his lead shrink with 10 laps to go as Montieth was able to run him down.

Montieth was beginning to take some stabs for the lead on the low side on the 17th tour when another caution flag slowed the pace, this time for a stopped Buckwalter.

The new green allowed Hodnett to pull away once again with Montieth left to try and keep pace.

But while able to keep Hodnett in sight, Montieth was never again able to get close enough to make a bid for the win.

Hodnett instead cruised uncontested to the 67th win of his career at the track with Montieth finishing second followed by Brock Zearfoss, Mark Smith and 15th starter Doug Esh.

Veteran Gary Stuhler jumped from the pole into the lead at the start of the super late model main over Matt Cosner who pounced from fifth to second.

Cosner was racing with Stuhler on the sixth tour when the second caution flag of the race appeared with Satterlee up to third.

Satterlee blasted by Cosner when action resumed and began his pursuit of the leader.

For several laps prior to a final caution flag with 12 laps to go, Satterlee tried his best to get by Stuhler, using both sides of the track to no avail as Stuhler worked the surface to perfection to hold him back.

But that final restart with 12 to go proved to be his undoing as a slow pace back to the restart by Stuhler allowed Satterlee to power underneath as the pair motored into the first corner.

Satterlee blasted low across the track and bolted into control rather handily and after doing so he began stretching out an advantage that he would hold to the final corner when a wide swing around the cushion allowed Stuhler to close back in just before the checkers.

Satterlee took the $2,000 payday ahead of Stuhler, Cosner, Coleby Frye and Tyler Horst. 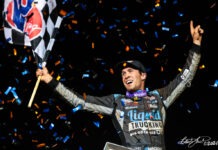