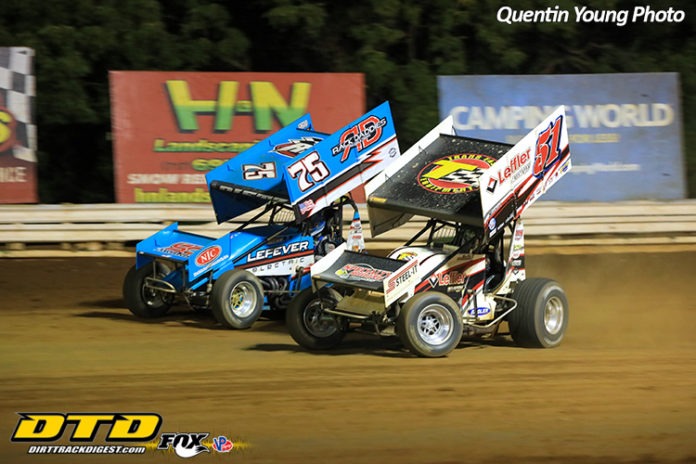 MECHANICSBURG, PA – Freddie Rahmer of Salfordville scored his first sprint car win of the season at Williams Grove Speedway on Friday night, taking the lead from Chase Dietz with 10 laps to go in the 25-lap main to record the 11th victory of his career at the track.

In the 40-lap World of Outlaws Late Models main, Brandon Sheppard of New Berlin, Illinois, scored the $10,000 flag to flag win for the second year in a row at the track.

The start of the 410 sprint car main was marred by a seven car crash on the frontstretch that saw two cars flip with Robbie Kendall flipping into the base of the flagstand while Chad Trout destroyed his mount just behind.

Trout was being evaluated for a possible elbow injury following the crash.

When action restarted, Jordan Givler led the first lap before fourth starter Chase Dietz took over by slipping underneath in the first corner.

Jason Solwold followed Dietz into second on the third circuit.

By lap six when Matt Campbell slowed on the track, Rahmer was up to third after lining up eighth for the restart following the initial start melee.

Rahmer went to work on Solwold when action resumed, taking second spot away with eight laps down and by that time Dietz had built up a 2.29 second lead over the field.

Rahmer steadily chipped away at the advantage over the ensuing laps and had the gap down to .865 seconds when a final caution flag unfurled with 12 laps to go.

Dietz would lead only one more lap after the restart as Rahmer darted low in the first turn on lap 15 to take command over the cushion-running leader.

Dietz raced back to Rahmer’s inside as the pair shot down the backstretch but Rahmer pulled away out of turn four with the point.

Danny Dietrich, who came to the stripe 12th on the restart after the initial start crash, muscled by Dietz for second with eight laps to go but failed to challenge Rahmer for the win.

Rahmer’s advantage at the finish was 1.060 seconds over Dietrich, Dietz, Solwold and Steve Buckwalter.

Five caution flags hampered the pace in the World of Outlaws Late Models main but no matter how many times leader Brandon Sheppard had to deal with a restart he proved untouchable for the $10,000 payday.

Polesitter Cade Dillard chased Sheppard until with eight laps to go he slipped over the turn two cushion and lost several spots.

This moved Gregg Satterlee into second who had been running third since lap 11.

After starting 13th, Rick Eckert motored into fourth on lap 16 and he would assume third as Dillard took his trip over the cushion.

Mason Zeigler started fourth and raced inside the top five the entire distance to end up fourth with Gene Knaub coming home in fifth.

Sheppard took the win by .787 seconds over Satterlee.