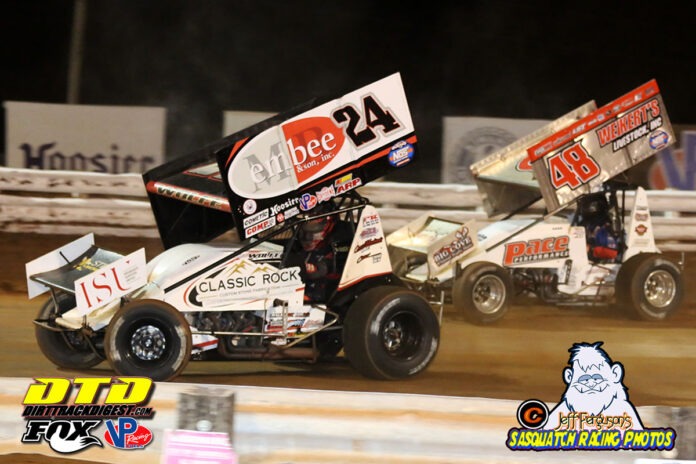 The 2021 season opener featuring 410 sprint cars only is slated for Sunday afternoon, March 14 at 2 pm.

But that will not be the last stand-alone program next season as again in 2021 three more big traditional Williams Grove shows will all be featured as “sprints only.”

“The Big Three” of 2021 when only the 410 sprints will appear will take place on May 28 when the All Stars stage the 10K to win Davey Brown Tribute, July 2 for the 33rd annual PA Speedweek Mitch Smith Memorial paying $15,000 to win and on August August 27 when the All Stars return for the Jack Gunn Memorial Twin 20s.

The World of Outlaws sprint cars will come to Williams Grove Speedway for a total of six events including the regular two-day May and July stands along with the two-day, 59th annual National Open on October 1 and 2.

The October 2 National Open itself will again pay a whopping $75,000 to the winner while also boasting a richer overall purse than previous versions while crowning the 2021 Lawrence Chevrolet 410 sprint car track champion.

Champion Racing Oil returns to sponsor the entire National Open weekend in 2021 as well as the Summer Nationals on July 23 and 24.

H & N Landscaping will present the World of Outlaws sprint cars at Williams Grove on May 14 and 15.

With a new Williams Grove show added to their agenda, The All Star Circuit of Champions sprints will visit the track an unprecedented four times in 2021.

The All Stars will vie in the Tommy Hinnershitz Classic on April 16, the aforementioned May 28 Davey Brown Tribute, and for The Jack Gunn Memorial Twin 20s on August 27 and the Dirt Classic Qualifier on September 17.

The USAC Silver Crown Series will return to the track along with the 410 sprints, on June 18.

More USAC action at the track this season will include a pair of USAC East Wingless 360 Sprints shows with one taking place as part of the “Spring Sprint Special” on April 2 while another appearances is slated for June 4.

The April 2 show will feature the 410 sprints, the USAC East Wingless 360 Sprints and the PASS/IMCA 305 sprint cars in a rare three-division, all open wheel program of high-flying action.

The unlimited, full-body super late models, once a regularly appearing division at the track, will return for five appearances at Williams Grove Speedway next season.

Two of the races will be sanctioned by the popular ULMS Late Model Series, taking place on March 19 and again on April 9 while the World of Outlaws Late Models will return on August 20.

Other super late model races will hit the track on March 26 and on August 6.

The HJ Towing & Recovery 358 sprint cars will be featured on 10 occasions at the track again in 2021 with the division kicking off action on April 16 running through September 24.

The United Racing Club 360 c.i. will compete just once next season, on July 9 while they also share a program with the LUCAS OIL ASCS 360 Sprints on April 30 for the Battle Of The Groves.

The 10-race Hoosier Diamond Series for 410 sprints will again be staged at Williams Grove in 2021 with a champion of the series declared based on performances in select increased purse races during the year.

Also returing for another run in 2021 will be the lucrative Yellow Breeches 500 races, with each of four races paying $500 just to start.

The Pennsylvania Speedweek Series will visit Williams Grove Speedway for a pair of shows, on June 25 for the series opener and on July 2 for the $15,000 to win Mitch Smith Memorial.

Kids Easter Night, and Fan Appreciation Night with free pre-race front pit access for general admission fans, will again be on the itinerary in 2021.