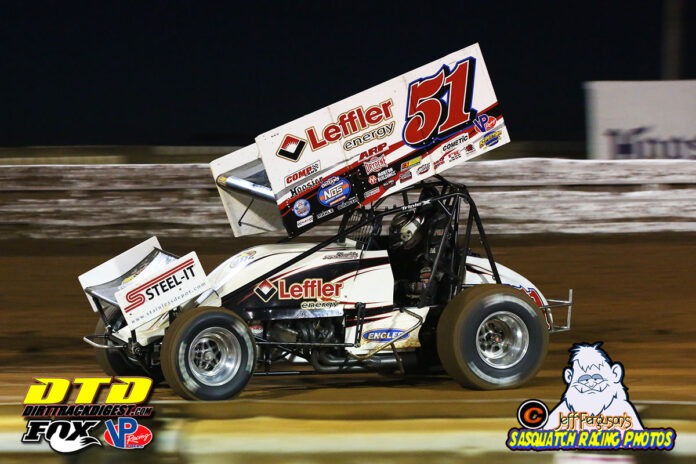 MECHANICSBURG, PA – Reigning Williams Grove Speedway track champion Freddie Rahmer may only be 25 years old as he embarks on the 2021 racing season, but he has the perspective of a driver twenty years his elder as he eyes the oval’s season opener coming up in just two weeks.

The Cumberland County track will open the new season with a 410 sprint car only racing program coming up on on Sunday afternoon, March 14 at 2 pm.

The Lawrence Chevrolet 410 sprints will race in a $5,500 to win, 25-lap main event to cap off the afternoon, presented by Hoosier Tire.

Rahmer and his RBR Racing No. 51 sprint car team are ready to defend his 2020 track title when they hit the clay at Williams Grove in two weeks.

“I think we are in good shape. We might be a little more prepared than we’ve been the last couple years,” Rahmer says of his team’s readiness for another assault on the prestigious track laurels.

“We work as hard as you can all winter. We don’t take too much time off at all. If we don’t start off good, we’ll work at it and make it good.”

“We are gonna’ shoot for that,” Rahmer says of his intentions to put up back to back track crowns during the new season ahead.

Rahmer also took a track crown in 2017, his first in the sport.

“ I think we’ve been close in the last couple years, I know we’re capable of going to the next step up.”

Rahmer says mostly he thinks it all will come down to him, personally, as he sits in the race car, at speed.

“I don’t think we’re missing anything equipment-wise or anything you can purchase,” Rahmer says.

“I’m always focused when we’re there but to try to get the best we can out of every lap – I think things build on each other but I think It’s mostly me, being in a good mental spot at the race track and I think we’re in a good position to do that.”

And according to Rahmer, all the extra purse money that Williams Grove announced for the 2021 season in December made it a, “no-brainer,” to decide to stay at Williams Grove on Fridays for the new season when the team was making its plans during the winter months.

“It’s a no-brainer. We’re 100 miles from the track. They didn’t have to do it and they did and it’s the best paying local track and one of the best in the whole country so we’re definitely gonna’ support them,” Rahmer noted.

“We’re lucky to race there.”

Fans will be treated to a pleasing $15 adult general admission price for what is sure to be a great field of sprinters on hand for the lidlifter.

Youth ages 13 – 20 will be admitted for $10 while kids ages 12 and under are always FREE at Williams Grove Speedway.