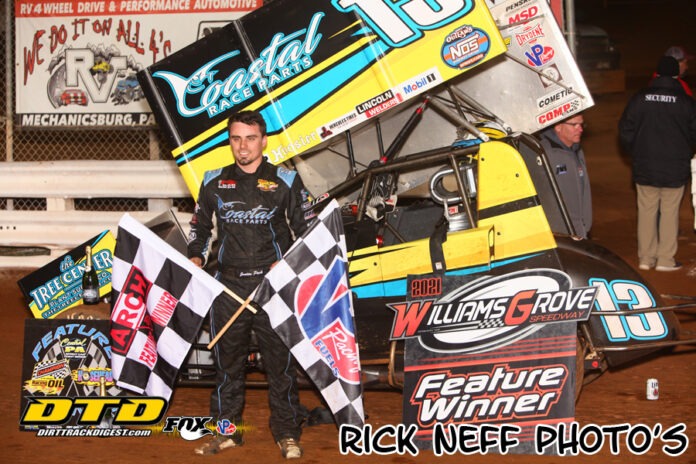 MECHANICSBURG, PA – Justin Peck of Mooresville, Indiana, wired the field for the 410 sprint car victory at Williams Grove Speedway on Friday night, taking a $5,500 score for his first ever oval victory.

At the wheel of the Buch No. 13, Peck withstood three restarts with TJ Stutts on his tail to pick up the victory.

In the 30-lap ULMS Super Late Model main, Max Blair of Centerville took the win, likewise to record his first ever oval checkers as well.

Peck drew the number two pill to start the 25-lap sprint car main and jetted out to the lead when action began, already entering the rear of the field with just five laps in the book.

The pace was lightning-quick on the early season surface and Peck had a three-second lead over Stutts when Tyler Courtney spun in the second corner one lap shy of the halfway point.

Another caution flag bunched the field a lap later, this time for a stopped Robbie Kendall on the frontstretch.

Peck then hit traffic again with three laps to go but had the field covered and he was racing onto the frontstretch for the checkers when instead he saw the yellow flag flash over the field, setting up a one-lap dash to the finish.

Peck drove easily to the win by 1.337 seconds over Stutts while 14th starter Tim Shaffer tried for third on the final restart.

Shaffer tried to bolt outside of Chase Dietz in the first corner when green replaced the yellow but despite a blistering effort, he failed to gain the spot.

Steve Buckwalter finished fifth after riding inside the top five during the entire event.

Heats went to Peck, Stutts and Anthony Macri with the consolation going to Lucas Wolfe.

We seem to hit it pretty well lately. Every time we hit the track, it’s fast and moving forward.”

“It feels good to be standing on the frontstretch here,” Peck said.

In the 30-lap main event for ULMS late models, it was Blair who grabbed the lead over Andy Haus and Coleby Frye.

Blair controlled the restart as Frye challenged Haus for second with Kyle Lee not far behind.

The yellow flew again with 12 laps to go.

Jason Covert then grabbed fourth on the restart from Lee as Blair pulled away.

Bryan Bernheisel set quick time over the 22-car field with a lap of 20.105 seconds however at the start of the first heat race he barrel rolled his No. 119 through the first corner and out over the guardrail, to exit the speedway.