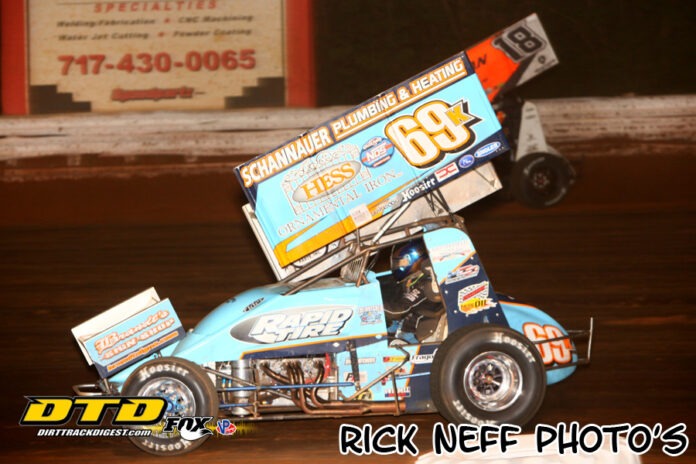 “It’s a number that this speedways never seen,” he said.

“I just thought if I could race long enough I could get here. I love racing at this place, I always have.”

And he got there in style after starting fourth in the 25-lap feature and jetting into the lead in the second corner after the green flag came out.

With one swoop through the middle in turn one and then to the outside in the second corner, Dewease swept his No. 69K past front row starters Jeff Halligan and Danny Dietrich.

After being scored the leader, Dewease had to deal with six restarts thanks to numerous cautions that plagued the first 12 circuits of the race.

Dietrich tried a slider for control on a lap eight restart and got alongside the leader but Dewease held his ground and maintained control.

And then when Dietrich tried it again on a lap 12 restart, Dewease made sure to hold him down low as the pair set their cars into the first corner, preventing his challenger from setting up another attempted flyer.

During the second half, non-stop part of the feature, Dewease poured on the speed and blasted to more than a straightaway advantage before entering lapped traffic with four laps to go.

The traffic forced Dewease to back down on his pace before taking the win by .912 seconds over Dietrich and Jeff Halligan.

“My old body don’t like sittin’ in that seat that long, my back hurts,” Dewease said of the lengthy event and enduring all the restarts.

“We’re not done, we’re just getting’ started,” he said when asked about reaching the 100 Williams Grove win milestone.

With the win, Dewease took the season point lead in the chase for the track title.

It was the Fayetteville drivers first victory at the oval since scoring his 99th on June 26 of last season.

Dewease won for the very first time at Williams Grove Speedway in the Mitch Smith Memorial on July 10, 1992 while wheeling the Walt Dyer Masonry No. 461 sprinter.

Alan Krimes finished fourth in the main event followed by Devon Borden, who was as high as third at one point.

Derek Locke led all 20 laps of the 358 sprint main to continue his domination of the class at the track this season.

Lock has now won all three events contested at the track this season, pushing his career win total at Williams Grove to six.