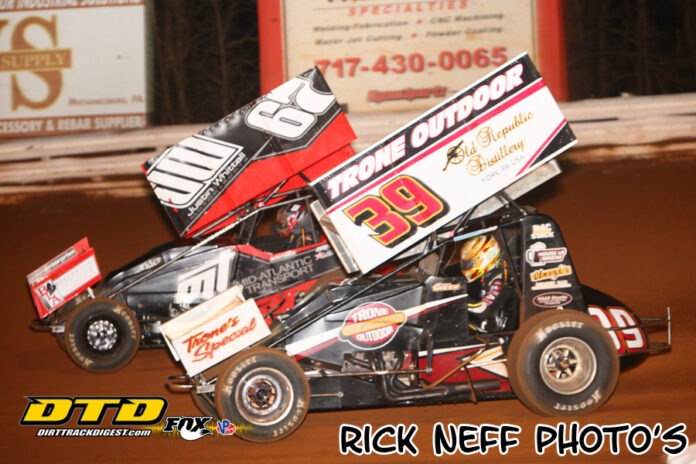 MECHANICSBURG, PA – Justin Whittall of Vincentown, New Jersey, led from flag to flag to pick up the win in the 25-lap sprint car feature at Williams Grove Speedway on Friday night.

Whittall pocketed $6,000 for the win including a $500 bonus from event sponsor H & N Landscaping.

It was his first ever Williams Grove Speedway win.

Whittall started his No. 67 on the pole of the 410 sprint main and took control over Kyle Moody at the start.

The only caution flag of the race appeared with eight laps completed when the top wing on Dylan Norris’ machine collapsed, causing him to stop on the speedway.

Moody made an attempt to challenge Whittall on the restart but after a few laps, Whittall began steadily pulling away from the field, opening up a nearly two-second advantage by the halfway point.

Danny Dietrich started seventh in the field and was up to third at the halfway point.

Whittall continue to hold a nice lead until the five-to-go point when both Moody and Dietrich began to close as the leader bore down on the backmarkers.

With three laps to go both Moody and Dietrich were on the leaders tail and Dietrich nearly got by Moody for second with a low run through the fourth turn.

That triggered Moody to move down in the fourth corner as well for the final two laps and as the leaders headed to the checkers the Lewisberry driver nearly pulled off the late upset as he drew to Whittall’s inside down the frontchute.

However Whittall was able to race back to the line and edge ahead of Moody back to the checkers, taking his win by a scant .107 seconds.

“This is a dream come true right now,” Whittall said. “I figured they were catching me, but I held my own tonight. I started falling off when I saw the lapped cars. I started getting nervous.”

“ I didn’t know how big my lead was. I thought I could lay back a little and save my tires and fuel. Towards the end, I started hearing Kyle behind me. I knew I had to step my game up, but I pushed a little too hard.”

Perigo held and commanding lead during the early going but little by little Drevicki of Reading was able to bite into his advantage.

With 10 laps to go, Drevicki was able to take command as Perigo began slipping backward while Alex Bright, Kenny Miller and Briggs Danner started moving to the front.

Drevicki was forced to contend with lapped traffic all the way to the finish of the non-stop event and that gave his trio of challengers all the chances they needed to not only catch the leader but also to attempt to pass him.

The final five laps of the race were wild all the way to the finish with Danner eventually knocking Bright back to third while Drevicki worked the cushion.

Danner was all over Drevicki during the final two circuits, drawing even for the lead and taking it more than once only to see Drevicki reclaim the spot.

A tight finish found Drevicki holding off his pursuers by .193 seconds with Danner ending up second followed by Alex Bright, Perigo and Tommy Kunsman.