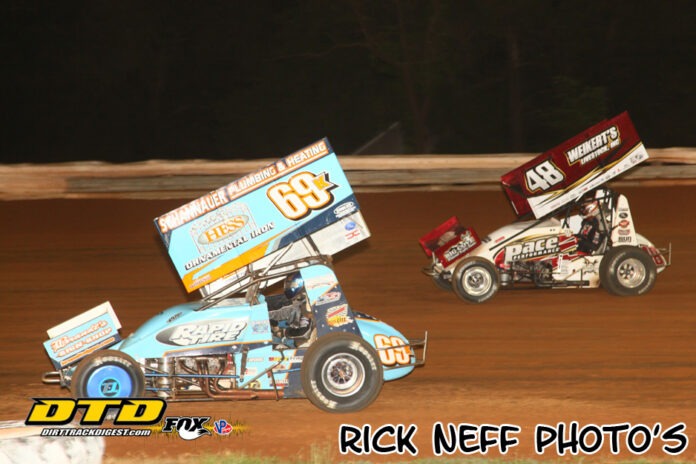 The victory just added to Dewease’s illustrious career statistics, as it was the 103rd of his sprint car career at Williams Grove, his third win in a row at the track and his fourth in the last five races there.

In addition, the win was his 31st overall in career speedweek action, making him the winningest driver in speedweek history since the series began in 1991.

The first 15 laps of the Mitch Smith Memorial went non-stop with polesitter Matt Campbell leading the way over second starter Dewease until lap 11.

Campbell entered the rear of the field with the lead on the eighth tour with Dewease, Freddie Rahmer and Danny Dietrich in tow.


And once in traffic, Dewease ate up Campbell’s advantage to pull off a slide job in the third and fourth turns to net the lead as the pair raced to the line on lap 11.

Meanwhile, drivers Rahmer, Justin Peck and Brent Marks were staging a wild battle for fourth when Marks slowed to a stop at the halfway point, bringing out the first caution flag of the race but rejoining for the new green.

That caution would turn out to be the first of four yellow or red flags during the second half of the event.

Dietrich disposed of Campbell for second on the restart and Peck followed suit a lap later.

And then that pair was battling for second with eight laps to go when the red flag appeared for Dylan Cisney who crunched his car after hopping the fourth turn cushion.

The stoppage erased a 1.962 second lead built by Dewease and during the red flag condition, Rahmer withdrew from the race

The recently crowned Western Pa Speedweek Champion, Ryan Smith got by Campbell for fourth on the ensuing restart and began challenging Peck for the third spot.

But then again the red flag appeared, this time for Campbell who jumped the cushion in turn three while Marks piled in as he raced in the ninth spot.

With five laps to go, action again resumed with Dewease holding sway while Peck got under Dietrich for second, nearly taking the spot only to see Dietrich squeeze back around against the outside turn two rail.

The final caution period was caused with three laps to go when Sam Hafertepe Jr. blew a right rear tire.