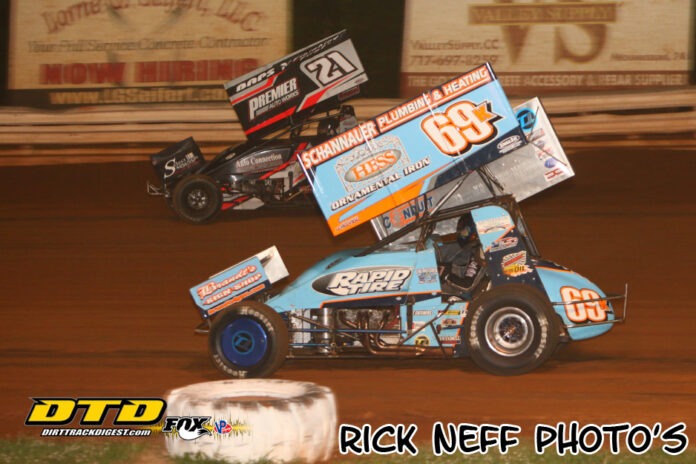 MECHANICSBURG, PA – Matt Campbell drove a flawless and smart race to pick up the $5,000 sprint car feature at Williams Grove Speedway on Friday night at the wheel of the Jerry Parrish-owned No. 21

The Fawn Grove driver came out on top in a hotly contested event from start to finish to notch his second career speedway victory.

In the 358 sprint ranks, Carlisle’s Derek Locke continued his remarkable domination of the division by claiming both features contested on the night.

His pair of victories marked his fifth and sixth of the season at the track where he has locked every other driver out of the winner’s circle.

The start of the 410 sprint car feature saw drama from the drop of the green when second starter Lance Dewease dropped to fourth while polesitter Campbell, third starter Danny Dietrich and fourth starter Anthony Macri went three-wide through the second corner for the lead.

Campbell came out on top while Dietrich and Macri settled in behind.

Dewease took a swipe at Macri for third on the sixth tour only to see Macri reclaim the spot and the leaders then entered the rear of the field on the eighth lap.

Dietrich then mounted a charge on Campbell that saw him drive low into the lead in both the first and third turns only to see Campbell perform flawlessly on the cushion to rocket back into control with huge runs out of the corners.

After Dietrich regrouped from his two failed attempts and Dewease took third from Macri on lap 11, Dietrich came back for more.

The Gettysburg driver blasted across the bottom of the first and second turns on the 13th loop only to again see a stout, solid running Campbell make up huge ground and vault back into the top spot as the pair shot out of turn two.

Dietrich then soon began feeling pressure from Dewease for the second spot before Dewease scored the spot with seven laps to go.

This set up a battle for the win with Dewease down low and Campbell up top but just as Dewease started taking jabs for command, Campbell took his low lane away and began turning back the advances.

The first caution flag of the race unfurled with five laps to go for a stopped Devon Borden and Campbell out paced Dewease on the restart to beat him into the first turn, again using his line on the bottom.

With Dewease in hot pursuit, a final yellow flag bunched the field with three laps to go and again Campbell protected the bottom to pull away onto the backstretch.

Dewease was forced to stalk but never pounce as he chased the leader around the inside all the way to the finish, ending up .512 seconds behind at the finish.

“That was fun, but it wasn’t easy,” Campbell said.

“I checked out the top before the race and I thought that was going to be where I needed to run. I guess I made the right call. It was fast at the beginning.”

The winner first talked about racing so close with Danny Dietrich,

“He raced me clean,” Campbell said about Dietrich

“I seen what he was trying to do. If I jumped the cushion, he had me cleared. I just kept thinking ‘keep it smooth, keep it smooth.’ We got to racing the lapped cars and that broke it up a little and gave me some space,” he said.

For Dewease’s part, Campbell said, “I got passed a lapped car and he showed his nose to me again and I knew it was time to move down.”

“I just tried to run clean laps, run around the bottom and not make any mistakes and here we are,” Campbell said.

Dietrich was third followed by Freddie Rahmer and TJ Stutts.

Locke drove from the 10th starting spot to get the lead in the first 358 sprint main of the night that was a make up event that originally fell victim to rain on July 16.

In the extra distance Summer Series event, it took Locke until lap 18 to get the lead from Steve Owings.

Owings had inherited control on lap seven when leader Brett Wanner dropped off of the pace.

Locke dominated the second and final 358 main of the night after starting on the pole and leading all 25 laps while lapping up to seventh position in the field.

Heats went to Locke and Eichelberger. 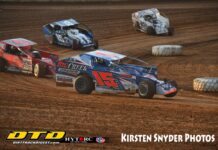