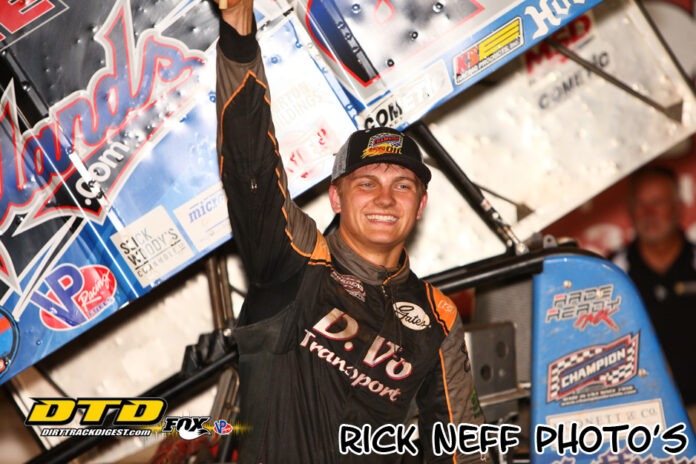 MECHANICSBURG, PA – Young Devon Borden of Raymond, Washington, took the first 410 sprint car victory of what is sure to be many more in his career, on Friday night at Williams Grove Speedway.

The 18-year old hot shoe got the call in early June to pilot the Mike Heffner-owned No. 27 and within two months he made good on the call for the $5,500 payday in the annual Billy Kimmel Memorial.

The victory marked the cars first trip back to the Williams Grove winner’s circle since Greg Hodnett last put it there in June, 2018.

Borden started on the pole of the 25-lap Kimmel Memorial and would lead every lap to the finish while surviving a pair of late race restarts.

Already on lap two Borden had a 1.8 second lead over third starter Chase Dietz and by lap six he began putting cars a lap down with a more than two second advantage.

Point leader Lance Dewease started 11th in the field and was up to fifth by lap five and then for the next several laps he battled with Alan Krimes for the fourth spot before finally taking the spot on the ninth tour.

At the halfway point, Borden had a 2.4 second lead and with 10 laps to go, he was a full straightaway ahead of Dietz, Tyler Ross and Dewease.

The first caution flag unfurled on lap 15 for a spun Bryn Gohn and Dewease took third from Ross on the restart while Borden raced into the first turn comfortably.

Borden’s lead was out to 1.5 seconds over his challengers with three laps to go when the final yellow flag appeared for a stopped car on the backchute.

While Dietz may have had designs on the lead when action resumed by bolting underneath in the first and second turns, Borden rode the cushion to his outside to slingshot back around and pull away onto the backstretch.

Dewease then went to work on Dietz and got second by the finish, ending up 1.694 seconds behind Borden at the checkers.

“This is amazing,” Borden said after pulling into victory lane.

“Just a sigh of relief. These Heffner guys are awesome. I can’t thank them enough for giving me this opportunity. We finally put it in victory lane and I’m thrilled.”

Borden said it was surreal and a dream come true when car owner Mike Heffner called in early June, just as he was graduating high school, asking him to take over the wheel of the No. 27.

“At the beginning of this year, I was nobody. We made a quick trip back here. Don Ott helped us out quite a bit. It allowed me to get on the map and perform good enough to get in this Heffner ride. It’s a dream come true. Man, we just won at Williams Grove!”

“I saw Chase and the famous Lance Dewease,” said Borden about the restart. “I tried to hit my marks and not think about who was behind me and hope for the best.”

Stuhler tried to mount a challenge at times before allowing Knaub to slip away on a few occasions.

Early in the race, Mike Lupfer and Dylan Yoder raced side by side for fourth for several laps before Yoder finally secured the spot.

Justin Weaver started third and finished in the spot, behind Stuhler.