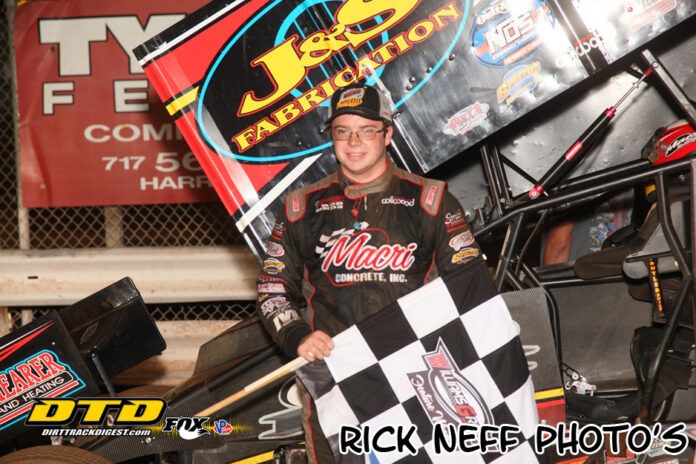 The 22-year old Macri beat point leader Lance Dewease back to the line for the victory by 1.438 seconds.

In the 40-lap World of Outlaws Late Models main, Rochester Mills’ Gregg Satterlee scored the $10,000 victory, leading the entire distance to pick up his third career checkers at the oval and the fourth of his career with the outlaws late models tour.

Second starter Dylan Norris took the lead at the start of the 25-lap sprint car feature over polesitter Landon Myers.

Macri started seventh in the field and was up to third by lap five.

By the halfway point, Norris had a one second lead as Macri battled with Myers for second while both cars drove up on the leader.

Myers took control of the race with 10 laps to go and Macri came along for the ride.

Macri stayed close to the leader before ducking under Myers for the top spot in the first turn with seven laps to go.

Shortly after crossing the line with 18 laps completed the red flag appeared for a violent series of flips in the first corner that saw Freddie Rahmer vault outside the speedway.

Rahmer had been racing with Devon Borden for sixth when he went to Borden’s outside as the pair set the cars into the turn.

Contact sent Rahmer flying and fortunately Rahmer came walking back up over the outside banking and climbed over the rail to get back inside the speedway but his car was destroyed.

The restart saw 13th starter Lance Dewease up to fourth behind Norris and with five to go, Macri had built a 1.485 second lead over Myers with Dewease up to third.

Dewease drove to second with two laps to go but ran out of time to run down Macri although he did bite into the advantage during the final mile.

“This win means more to me than some of my other wins,” Macri said.

“It’s really cool and means a lot to win here after coming here as a kid and always dreaming of winning here.”

Macri credited his mechanic Jim Shuttlesworth for making he and his team contenders.

“He installed confidence in the team,” Macri said.

“He never really gets down and always keeps pushing and works hard. He gives me a good

racecar and the two of us really click when it comes to the race track and working in the shop.”

Heats went to Myers and Norris.

Gregg Satterlee began the 40-lap World of Outlaws Late Models main in second and took the lead at the start over Max Blair.

The first caution flag of the race unfurled with six laps down finding Blair racing second followed by Chris Madden and Kyle Larson.

Madden and NASCAR point leader Larson disposed of Blair on the restart and then Larson went to work on Madden for the second spot however the pace was again slowed with 10 laps down for debris on the speedway.

With Satterlee comfortably out in front, Larson again battled for second when action restarted but found Madden trying to take his top lane away in the middle of the first and second turns.

So Larson began switching up lines as well and eventually beat Madden to the punch on lap 13 to get second and set his sights on the leader.

After Satterlee saw Larson get close, it seemed he was able to pour on the speed at the front and pull away with the top spot.

But then the backmarkers came into play, at times racing three wide directly in front of the leaders with 15 laps to go and under.

This allowed Larson to close in for control and it forced Satterlee to choose wisely as he worked to put cars a lap down.

With heavy traffic in play, Larson appeared ready to take command, getting to Satterlee’s direct outside in the fourth corner on lap 33 although Satterlee did lead the pair back to the stripe.

But then doom struck Larson when his car was reportedly struck by a large clump of clay, throwing his nose sideways in the first turn as he hopped sideways over the cushion.

With a wounded machine, Larson then slowed with four laps to go and withdrew from the event.

Running fourth, Dan Stone stopped on the track with one lap to go, setting up a green-white-checker finish for Satterlee with Madden in second however there was no challenge for the lead during the final mile.

“This group of guys that travel around the country are the best in the business,” Satterlee said of the outlaws late models drivers.

“Then you throw a guy like Kyle Larson in and it’s a pretty tough field.”

“It’s a long 40 laps around here. I tried to keep everyone behind me and hit my marks and not do anything stupid behind the wheel. For the most part, it was pretty smooth rolling and we made it to victory lane.”

Madden finished .754 seconds behind at the finish followed by Kyle Hardy, Rick Eckert and Matt Cosner.