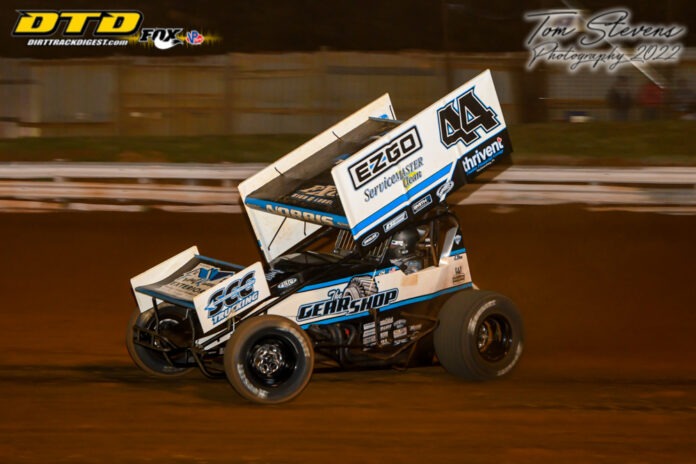 Norris started on the pole of the 25-lap 410 sprint car main and was pursued by Chase Dietz and seventh starter Devon Borden.

Borden drove into third on the fourth lap and both he and Dietz had Norris lined up for a challenge on the ninth tour as the trio ran into traffic when a yellow flag for a stopped Brent Shearer broke up the would-be battle.

Borden tried to blister by Dietz on the restart but instead got sideways in an effort not to crash both he and Dietz out of the race in the first turn before losing third to Ryan Smith.

But Borden quickly recovered a half lap later when he got back around Smith before rapidly running down Dietz for second on the 12th lap.

Another caution, again for Shearer, this time on lap 13 slowed the pace and set up a restart.

Norris got away from Borden when action resumed but couldn’t settle into a pace as another yellow, this time for a stopped Parker Price Miller, fell on the field with 11 laps to go.

And then Dietz broke out of third on the restart, putting Kyle Reinhardt into the sport.

Borden hung with Norris for the return to action but never mounted the challenge it seemed he might have been capable of.

With nine laps to go eighth starter Danny Dietrich surged into fourth and seemed headed for better things only to also slow and drop out of the race.

Norris kept a comfortable advantage during the late going and to the finish as Borden slowed suddenly on the final lap, dropping like a rock as the rest of the field raced by.

Satterlee came to second on the third tour but Eckert would sail unchallenged to the win.

During the last 10 laps of the main event, Gene Knaub, Jason Covert and Jared Miley battled for the third spot with all three pilots finishing in that order.

Heats went to Covert and Knaub with Covert setting fast time, posting a lap of 16.919 seconds.

The victory was the ninth of Eckert’s career at the oval.