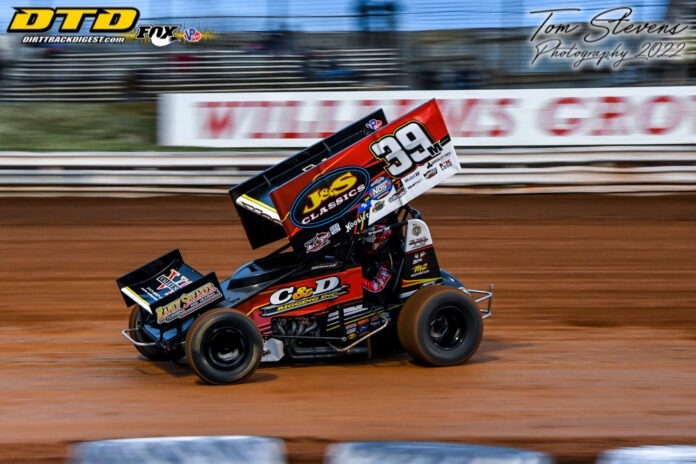 MECHANICSBURG, PA – The NOS Energy Drink World of Outlaws Sprint Cars Series will invade Williams Grove Speedway for the first time this season coming up this Friday and Saturday night, May 13 and 14, for the running of Morgan Cup Weekend.

Kids ages 12 and under are always admitted for FREE at Williams Grove.

The winner will also rest on bragging rights as Morgan Cup Champion for a year of either the World of Outlaws series stars or those of the Pennsylvania Posse.

Each feature event, both Friday and Saturday, will pay $1,000 just to start.

In memory of former track champion Jim Nace, the Fast Tees Fast Time Award worth $300 will be up for grabs both nights for the driver who sets overall quick time.

Fireworks will be part of both programs.

The locals known as the Pennsylvania Posse will have a few stars shining bright as the outlaws invasion begins.

Both Brent Marks and Anthony Macri have shown great speed already this season and indeed both have won at the Grove since the year began.

Macri of Dillsburg was on fire in the region in April, scoring six of seven events entered at one point during mid-month.

“I definitely feel like we are a little bit more confident than years past,” says Macri about his perspective on his chances of scoring against the outlaws when they hit town.

“I feel like the car has been pretty solid the whole night compared to years past and we’re finally able to put ourselves in a position to time trial well which is really important against the outlaws.”

“I feel like if we can put ourselves in a dash then I feel like a win isn’t out of the equation,” Macri says.

Lemoore, California’s Carson Macedo has been in outlaws victory lane most this season to date, pocketing four wins as the Williams Grove shows come into sight.

Further back on the win list but again sitting atop the World of Outlaws Series points as Williams Grove dawns is “The Big Cat,” Brad Sweet of Grass Valley, California.

Sweet has just one win on the year so far but has racked up the top five finishes, sitting at 12 in 17 season starts.

The Californians are primed for their invasion into Posse land as is Connecticut’s David Gravel who is now third in outlaws points.

Two of the trio in the form of Gravel and Macedo have gotten the job done at Williams Grove already in their careers, combining for a total of 11 career oval wins while Sweet is still looking for his elusive first.

Danny Dietrich is the current Williams Grove points leader after staging a massive run from 17th to second on April 29.

Fans who wish to obtain any reserved seats for any of the six outlaws events at the track in 2022 can purchase tickets via the official outlaws official website located at www.worldofoutlaws.com/tix or by calling 1.844.DIRT.TIX.

A premier residential and commercial landscaping company in the region, H & N Landscaping will present the entire weekend of World of Outlaws/Pennsylvania Posse racing action.

H & N Landscaping, located at 675 Williams Grove Road in Mechanicsburg, has been serving the region for over 35 years.