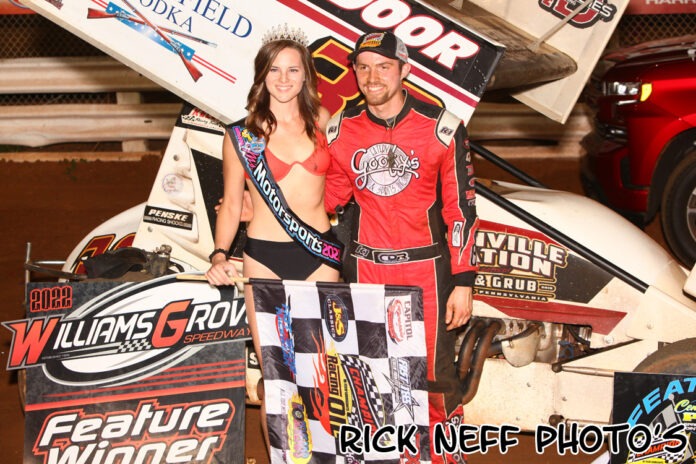 Dietz grabbed the lead from Billy Dietrich in the closing laps of the regular 410 sprint 25-lap main event and went on to the $5,500 win. It was his second career win and second straight in John Trone’s No. 39.

“That was a fun race,” Dietz said. “The track got curbed-up in both corners. I knew at some point, the bottom was going to rubber-up. It was a matter of when and where it had to be. I was really fighting the car on the curb trying to make ground where I could. I didn’t feel the greatest on the bottom. I had to make the right moves in traffic. We were running the curb and Billy hadn’t been up there. I made the right choice and did it again. To just get the first one, let alone two in a row, this is really cool.”

Halligan got beside Wolfe as they raced down the frontstretch and had the preferred line entering turn one. He took the lead from Wolfe and then pulled away. Dietrich took second from Wolfe.

Halligan began lapping slower cars with a 2-second lead over Dietrich. Sixth starting Dietz challenged Wolfe for third and eventually made the pass.

Dietrich began closing on the leader while running the inside line. Dietrich passed Halligan coming off turn four with 10 laps to go.

Dietz raced by Halligan and into second with eight laps to go only to see Halligan take the spot back off of the second corner. The top three were very close with seven to go.

Dietz squeezed back by Halligan in lapped traffic in turn three and then cleared two slower cars and went after the leader. Dietrich was held up by slower traffic on the bottom in turns one and two and Dietz blasted the top driving by the slower cars and Dietrich for the lead with four laps to go.