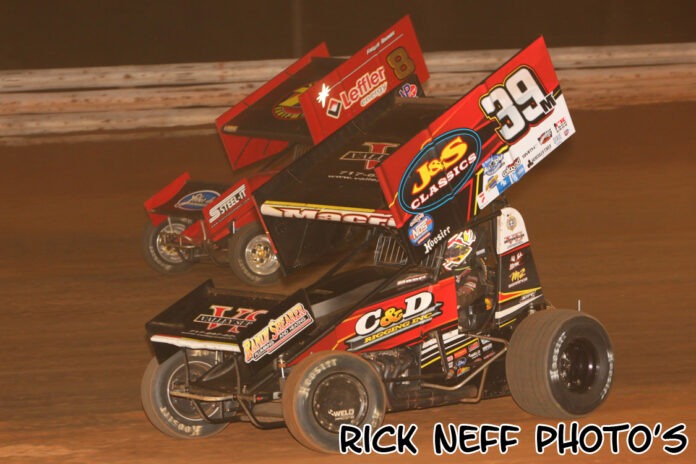 MECHANICSBURG, PA – Anthony Macri won the opening night of Pennsylvania Speedweek at Williams Grove Speedway on Friday night, scoring a $7,001 victory for his second win of the season at the track.

Macri and Justin Peck started the 30-lap speedweek main on the front row with Macri beating Peck into the first turn by the narrowest of margins.

Peck went in to Macri’s outside but Macri made the car wide enough to prevent a Peck sweep into the lead.

Dylan Cisney then slowed for the first caution flag of the race with three laps completed.

By lap eight Macri had a 1.6 second lead over Peck and Brent Marks however he soon came upon the backmarkers by lap 10.

In dirty air, Macri’s speed was held back as Peck and Marks battled for second with Marks taking his first swipe at the spot on lap 13 only to see Peck regain it.

A lap later Marks tried it again in the first turn but again Peck prevailed before Marks took the spot at the halfway point to begin chasing down the leader.

The pair of Marks and Peck was challenging Macri for control as the trio ran through traffic on lap 18 when Danny Dietrich slowed just enough to bring out the caution before again firing off after the yellow unfurled.

The caution flag broke up a thrilling race at the front as clean air gave Macri new life when action resumed.

Peck took a shot at Marks for second on the restart as Macri again got away to a 1.6 second lead with five laps to go.

Traffic again came into play during the final few laps but by then it was too late for Marks to close as he instead crossed the finish line .959 seconds behind.

It was the Dillsburg driver’s fifth career sprint car win at Williams Grove.

“As soon as we got into traffic, the car got extremely tight,” Macri said.

“I had to keep playing with the wing. Luckily, I found a position with the wing that was kind of okay. We still weren’t perfect when we got to lapped traffic.”

After polesitter Chad Criswell slowed on the first lap of the 20-lap 358 sprint car feature, the event would go non-stop.

Brehm took his first shot for the lead with an inside turn three move on the fourth lap but Adams was up to that challenge.

However a lap later Brehm made the move stick to drive into control.

The leader entered the backmarkers with nine laps to go while Kody Hartlaub raced into the second spot shortly after.

Brehm worked his way through traffic to take the checkers with style by 2.152 seconds over Hartlaub.

Derek Locke was third followed by Adams and Doug Hammaker.

PA Dyno Hard Chargers were Ryan Smith in the 410 sprints and Derek Locke in the 358 sprints. 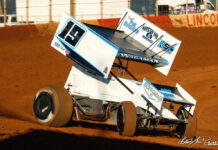 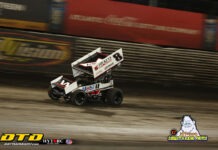