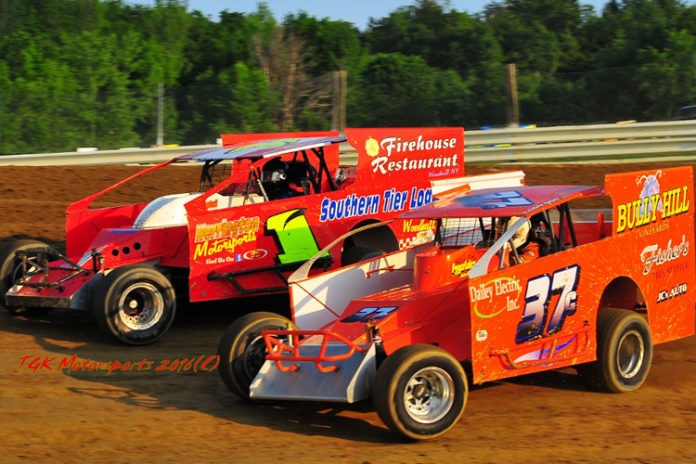 WOODHULL, NY – The much anticipated 2017 season schedule is still being ironed out and will be released in the coming weeks, but to hold fans and teams over for now is the opening dates for practice and opening night.

The annual Swarthout Recycling Arnot Mall Car Show in Horseheads, NY is planned for St. Patrick’s Day weekend, March 17th, 18th and 19th. Move in night will be Friday night, with the show running through Saturday and Sunday. More information on the mall show and registration is open on Woodhull’s website.

A free grandstand Open Practice night has been set for Saturday April 8th from 5:00pm-9:00pm. That will provide the first opportunity to get laps in for the upcoming season, in an event that Mother Nature has not allowed to happen the last several seasons. All divisions are open to participate and competitors outside Woodhull are also welcome to participate in the Open Practice Night.

Opening Night for all divisions except for the 370 Modifieds will take place just one week later on Saturday April 15th. The 370 Modified opener is set for Saturday April 29th, where everyone will be aiming for eighteen-time and defending track champion Billy Van Pelt.

April 15th will see the Crate Late Models and Hobby Stocks make their Woodhull debut as weekly divisions. All rules for these new divisions are finalized and posted online at www.woodhullraceway.com/rules.