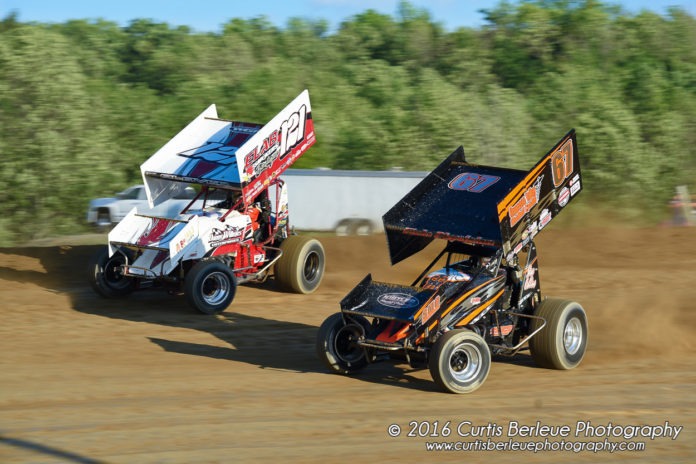 WOODHULL, NY – In the first of what will be several schedule announcements made this week, Woodhull Raceway is proud to announce that the Patriot Sprint Tour, CRSA 305 Sprint Tour and the popular 270 Micro Sprint Reunion will return for the 2017 race season on the High Banks.

The Patriot Sprint Tour, at the controls of Mike Emhof, will make two traditional stops to ‘New York’s Toughest Bullring’ with one date in May and one date in July.

“When the sprint cars come to town, fans get to see the shear speed and handling ability of these powerful machines on a challenging third-mile,” said Woodhull Raceway owner and promoter Ted White.

The tour will first tackle the Steuben County clay on Saturday May 13th, where they will join the 370 Modifieds, Crate Sportsman, Crate Late Models, Street Stocks, Mini Stocks and Front Wheel Drives. Last year’s May show was made up in June due to rain, and saw past PST champion Jared Zimbardi win his first event at Woodhull after being on tour for eleven seasons.

In 2016, Mike Emhof took over the controls of the CRSA 305 Sprint Tour, which now has the opportunity to visit Woodhull Raceway for the first time on Saturday June 10th, 2017. The best 305 drivers that the capital district has to offer will go up against several local competitors that frequent tracks like Clinton County and Canandaigua- in what will be a dog fight at ‘The Bullring.’

The always-popular 270 Micro Sprint Reunion is back for the 2017 season. An event that pulls nearly 40 micro sprints on a yearly basis from all over New York, Pennsylvania, New Jersey and Ohio will take on ‘New York’s Toughest Bullring’ on Saturday August 12th. Last year’s thrilling finishes set the bar very high for this year’s edition of the 270 Reunion- who will claim 2017 supremacy?