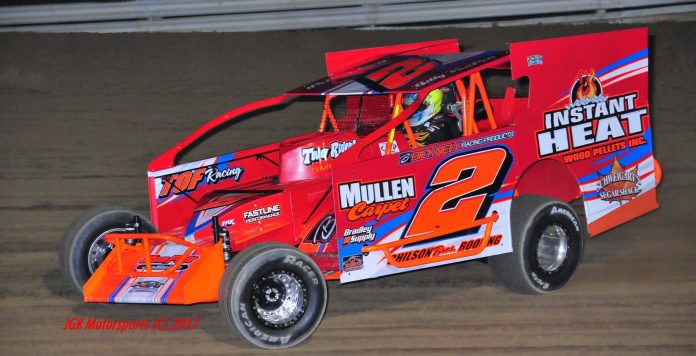 WOODHULL, NY – This Saturday, April 29, Woodhull Raceway, Mountain Dew and Pepsi present the first complete show of the 2017 season. The Insinger Performance 370 Modifieds will compete in their first points race of the season with Westfield, PA pilot Billy Van Pelt returning as the defending track champion searching for a Modified record nineteenth title.

Van Pelt has garnered eighteen championships in the 370 Modified division at Woodhull in his storied career, but ‘BVP’ has a laundry list of drivers that could knock him off the top rung this season. This group of Northeast stars will be ‘all hopped up on Mountain Dew’ this weekend as they converge on ‘New York’s Toughest Bullring’ this Saturday night at 6:30PM.

Van Pelt also enters 2017 with a new team, but a familiar team as he goes back to work for Kevin Chilson’s Instant Heat Wood Pellets race team. The pairing previously won track titles at Woodhull in 2010, 2011 and 2012 while amassing twenty-six feature wins.

One driver to keep tabs on as his team comes loaded for bear in 2017 is Kenny Peoples Jr. Peoples returns to the famous family racing color of yellow, as well as an updated engine and shock program. Over the offseason, Peoples said he is as hungry as he’s ever been for success at ‘New York’s Toughest Bullring.’

Donnie Lawson has started his season strong in Crate Sportsman action and is ready to tackle weekly Modified competition in the family-owned No. 11. Lawson picked up a victory in 2016 and will be looking to start the season his first of the year Saturday night.


Dillon Groover was inches away from his first Modified win in 2016, and has looked stout in his few laps in a Modified already this season at Outlaw Speedway and a practice session at Woodhull. The Beaver Dams, NY driver is ready to take the next step in his career and getting that first win out of the way is top priority on his list.

Fans can find their way into the grandstands Saturday night for $11 with the gates opening up at 4:30pm, with Scott Lyon’s first green flag dropping at 6:30pm.

Woodhull Raceway can be found in Woodhull, NY, just 30 minutes West of Corning, NY, competing weekly on Saturday nights from mid-April all the way until Labor Day Weekend. The track offers numerous special events including the Patriot Sprint Tour 360 Sprints and the Short Track Super Series Modifieds in mid-August.