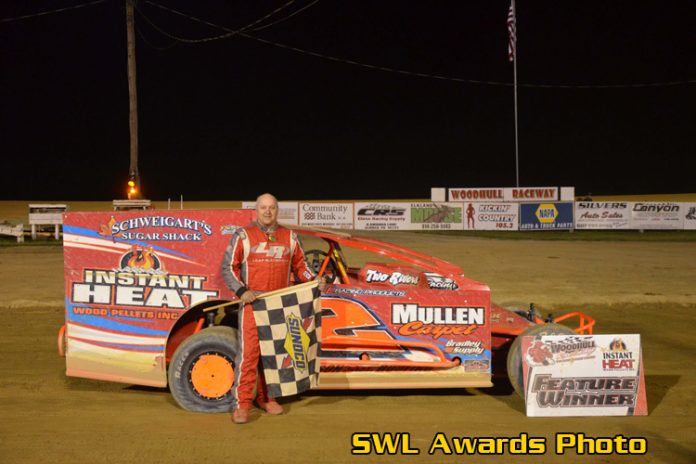 (WOODHULL, NY) – Fans and competitors of the High Banks at Woodhull Raceway knew that the rough start to the season for Billy Van Pelt and the Kevin Chilson Racing team in the Insinger Performance 370 Modifieds would only last just so long.  The question was, would the team go all the way into June before their bright red and fluorescent orange No. 2 would grace the very Victory Lane that Chilson’s business sponsors?

The answer to that question on Saturday night was a resounding ‘no.’  Finishes of fourteenth and sixteenth in the handicap would land Van Pelt on the pole for Saturday’s twenty-five-lap feature event sponsored by Brico Technologies.

Once the green flag dropped, Van Pelt showed that he would be the man to beat.  A quick caution on lap one would stack the field back up for a restart, with the caution coming back out quickly just two laps later.  Dillon Groover made contact with Brady Fultz, sending Fultz in a half-spin that collected Brian Doolittle and Randy Chrysler- in a rare Woodhull start.


With consecutive cautions slowing the field, the next restart was single file and would see the field lay down a large number of green flag laps.  While Van Pelt led the event, Russell Morseman was making a charge toward the front from his fourth starting spot.  Morseman rode in second place and did not allow Van Pelt to get more than two to three car lengths away.

But as the long green flag run wore on, Morseman started losing distance to Van Pelt and started to fall into the clutches of Art Goodier, Boyd MacTavish and Donnie Lawson.  Goodier and MacTavish started in third and second respectively, but it was Lawson who made the charge from his tenth starting spot that wow’ed the fans.  Lawson has been the most consistent driver of 2017, making him the current point leader, with finishes of second, second and now fifth.

Van Pelt pulled away at the end, having nearly a full straightaway at Scott Lyon’s double checkered flags.  Morseman, Goodier, MacTavish and Lawson rounded out the top five.  Though he picked up the victory, Van Pelt was fortunate the race wasn’t thirty-five laps like the Modified feature will be this coming week.  The right rear tire went flat while proceeding through post-race victory lane.

“It’s been a little frustrating, but I’ve been saying in our Facebook posts that I’ve had faith in the team and we were going to turn it around,” said a relieved Van Pelt in Instant Heat Wood Pellets Victory Lane.

Though he started up front, Van Pelt wants to start having to start in the back and work his way into battles for top fives and victories.

“I had the luck of the handicap tonight, but that’s not how I want to do this.  I want to be finishing well and have to come from the back to the front to try and win these races.”

Van Pelt talked about the process of getting the bugs worked out of a brand new piece- between chassis and engine package.

“The first two weeks, we had carburetor trouble and I made a poor choice on set up.  Even tonight, it wasn’t perfect but it got the job done.”

Just as Van Pelt has had early season trouble, NAPA Crate Sportsman competitor Jake Dgien has also had trouble.  Dgien’s trouble has been a costly one so far this season- keeping motors to hold together.

Saturday night would see Dgien roll off the starting grid with his third different engine between the frame rails of his brand new 2017 Hig Fab Chassis in the fourth position.  Though Dgien was fast, nobody was as fast as Dave Richmond- who started on the outside pole and took off into the lead.

The Crate Sportsman Rookie would lead the opening nine laps, until a caution on the ninth lap would see his bid for the win come to a spinning halt.  Richmond led the field on the restart to turn one, but would jump back on the gas just a split second too quick.  The white and red No. 93 would spin in front of the entire field, but fortunately every car in the twenty-car field missed Richmond in the process.

This handed the lead over to fellow rookie Jeffery Daugherty, who would lead laps ten, eleven and twelve- but Dgien was knocking heavily on the door for the lead.  Dgien would take the lead in turns one and two on lap twelve.

Top point contenders Dale Welty and Stevie Hartman III were also making their way through the field to try and challenge for top five finishing spots.  Hartman III had to come from the eleventh starting spot, while Welty had to come from dead last after a mechanical failure on the front end of his No. 123 in the heat.

Hartman would close in on Dgien in the closing laps, but Dgien had enough to secure the much-needed victory.

“We’ve had really bad luck with motors this year,” said Dgien. “We fortunately had enough help that we could get a new one this week.  I have to thank everyone for the help to even get here.  They are the reason we are here tonight.”

Though jubilant in the victory, Dgien did have a sense of humor about a moment in the race that nearly saw the win slip from his grasp.  While working lap traffic, Dgien made a move on the outside lane- catching the cushion and nearly losing the lead to Hartman.

“The car was definitely better on the bottom,” laughed Dgien. “That was almost really bad.”

With several of the regular SWL Awards & Photos Crate Late Models out on the road traveling this past weekend, only five Crate Late Models took the green in their twenty-lap feature event.  Rookie in the division, Darin Horton, took off in the lead and would lead the first three laps of his Crate Late Model career.

Regardless of how many cars attended, Steve LeBarron was not going to be beat on this night.  LeBarron had the Troups Creek Auto Parts machine on auto-pilot to win the race.  He had a great battle with Brad Mesler in the opening laps, but would outlast Mesler in the preferred bottom groove.  Doug Ricotta, Darin Horton and Kurt Stebbins rounded out the top five.

“The car was good, maybe just a little too tight,” said LeBarron.  “I knew I was going to have to contend with (Mesler) after seeing what he did in the heat.  But with him running the outside, I just had to stay committed on the bottom.  Thanks to Teddy (White) tonight too, the track is perfect tonight.”

Glenn Whritenour made it a clean sweep in the Street Stocks this weekend, winning features at nearby Outlaw Speedway Friday night and then making it a sweep in the Joe Willcox Performance Automatics Street Stocks at Woodhull on Saturday.

Dan Gardner took his Potter Chassis from the pole position to lead the first nine laps of the twenty-two car feature.  But Whritenour was charging hard from his ninth place starting spot.  Mick Seeley started third and was as high as battling for second, but a spin in front of the entire field dropped him back to a finish of tenth on the night.

Whritenour got alongside Gardner on laps seven, eight and nine before finally pulling off a nifty high-low switch off turn two to claim the lead at the halfway mark.  A scary accident in turn four involving Kurt and Kane Stebbins, Dylan Cecce and Brett Marlatt drew the red flag with one lap remaining.  Cecce and Marlatt did not finish with badly wrecked racecars.

“Hats off to my crew and to Ted White on this racetrack,” said Whritenour.  “The track has been slick here a little bit, so we tried our Outlaw setup here and it worked perfect.”

Once Woodard took the lead, he would have to fend off challenges from John Hand Jr.  But in the end, Woodard stretched the lead out coming to the double-checkered flags.

The Woodhull Auto Supply Front Wheel Drive feature was one of the best races of the night Saturday.  Nate Freeland and Shawn Gleason waged war for the lead in the thirty-five-lap special, but Codie Baker would come back to shock both of them with just five laps remaining.

Baker had the fans fist-pumping on the frontstretch as he streaked across the line to take the victory.  Freeland settled for second, Gleason finished third, Adam DelGrosso fourth and early race leader Matt Prescott rounded out the top five.

Carter Dennis would win his third points race of the season Saturday in the Hobby Stocks, but it was Joe Birdsall that appeared to have the three-car field covered to get his first win since moving up to the Hobby Stocks.  Birdsall had contact racing with Brent Williams late in the going, which required him to start second behind Dennis after a spin.

Dennis would hold off the late race heroics of Birdsall’s No. 63 to pick up the victory.  Birdsall and Williams completed the rest of the finishing order.

Jordan Bacon, or ‘Burinin’ Bacon’ as he has been labeled at other area speedways, finally claimed his first victory at Woodhull in two seasons of trying.  Bacon’s No. 747 was like a leer jet in the Daughtery’s Auto Sales Warriors ten-lap feature, albeit a very loose car.

Bacon was able to adjust his driving style to hold on to the win over first-time runner Lucas Cornelius, Rick Amidon, Cole Youse and Carter Crooker the top five.

This Saturday at Woodhull Raceway will be Griffith Energy and Elkland Moose Night for the annual George Williams Memorial. The 370 Modifieds will race thirty-five laps in distance, paying a cool $2,000 to the winner.  They will be joined by the Crate Sportsman, Crate Late Models, Street Stocks, Mini Stocks, Front Wheel Drives, Woodhull Warriors and Hobby Stocks.  Race time is set for 6:30PM.