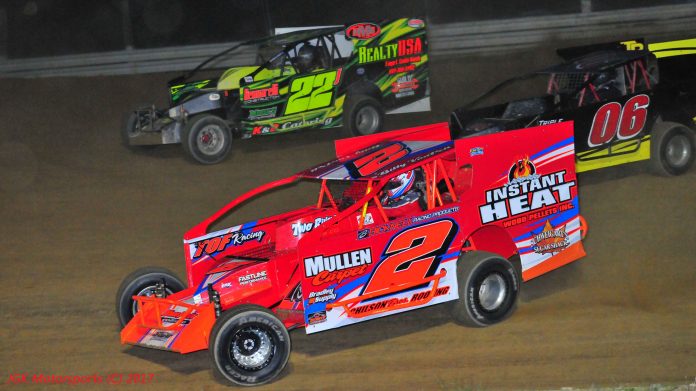 Van Pelt was strong in his Instant Heat Wood Pellets, Mullen Carpet sponsored Bicknell for Kevin Chilson Racing. But now making this victory two wins in a row, Van Pelt will start to see his No. 2 fall in the handicap, making the next few upcoming weeks pretty interesting!

Art Goodier was once again the feel-good story of the night, finishing on the podium for the second week in a row. Goodier talked in the pit area pre-race about how they have really started to hit on a hot setup on his No. 1G Teo Pro Car.

Chris Daugherty finished a season-best third, as they continue to plug away on set up on his Williams Construction & Sprayfoam No. 22jz. Donnie Lawson was the big mover of the race, clawing and scraping his way to another top five finish in fourth. That now makes Lawson the only driver in the Modifieds to have finished in the top five in each event this season- making him the point leader.


Brian Doolittle, who was featured on the website in a driver profile this week, finished in the top five. It was Doolittle’s first top five of the season- one that will give his team and Hig Fab Chassis a spark to carry them through the Summer season.

One other competitor of note on Saturday night was Boyd MacTavish, who ran most of the event in the top three positions, battling hard with Ostrowsky. But a failure in the brake system relegated MacTavish to a twelfth place finish, however the Herrington Motorsports ride made sure the field knew they were there on setup.

“George Williams was a super super guy and it means a lot to win on his memorial night,” said Van Pelt. “But to also win on Memorial Day Weekend is special- we thank all of the men and service women of the United States for protecting the freedoms we all enjoy.”

Daugherty has had a rough start to the season in the NAPA Crate Sportsman in 2017, but with that rough start came the outside pole starting position on Saturday night. He would assume the lead in the twenty-five-lap event from Rookie Dave Richmond on the opening green flag.

The opening lap saw a big crash in turn one, collecting several cars, which appeared to have been sparked by contact between Richmond and another competitor sending Richmond spinning in front of the field. Richmond collected heat winner Casey Pavlick, Dayton Brewer and Josh Keesey, all of whom could not continue.

Once back under the green flag, Daugherty set the pace for the entire event- just as he did last Fall when he won his first Crate Sportsman checkered flag in his very first start. But the battle was intense for the runner up spot.

Last week’s winner Jake Dgien was charging hard from the seventh starting position, and locked into a battle with Bobby Peoples for second. While racing close quarters with Peoples, Dgien spun around in the first turn collecting point leader Stevie Hartman III. Hartman would not be able to continue with damage and would surrender the point lead to Dale Welty by night’s end.

Welty started ninth and worked his way into the third spot which would be enough to take the point lead, but not challenge Daugherty for the win. Daugherty would capture his first win of 2017 over Peoples, Welty, Brandon Butler and AJ Costley who both had to eventful races to finish top five on Saturday night.

“Last year’s win was definitely at the top, but this one is very very close,” said Daugherty in Instant Heat Wood Pellets Victory Lane. “Without all of these (crew guys), we just simply wouldn’t be standing here. I have to thank all of them for their support.”

John Waters captured his third victory of 2017, taking the lead and stretching his advantage on Kurt Stebbins late in the going to win the twenty-lap SWL Awards Crate Late Model feature.

Stebbins picked up his best finish of the year aboard his No. 26 in second. Point leader Steve LeBarron had a solid night with a heat race win and a podium finish for the Troups Creek Auto Parts No. 29. The rest of the top five included Jason Knowles and Rookie Darin Horton, who continued to make gains in his Dave’s Colonial Motors No. 66 for Atta Boy Racing.

“Teddy and the guys did a great job with this track tonight and I hope more cars come out to support them,” said Waters. “Supporting Woodhull in our backyard has been fun and has allowed us to try some things that we don’t get to try when we’re out on the RUSH Tour.”

Brett Marlatt took a badly damaged racecar home last Saturday night, after a major accident on the frontstretch on the white flag lap in the Joe Willcox Performance Automatics feature race. But after having Nitro Fabrication replace the rear clip and having fellow competitor Dylan Potter do some work to the front end, Marlatt was back in the race and took his RLB Trucking No. 99 from the outside pole for their twenty-lap feature event.

Marlatt would dominate the race from the top spot, but the story of this race was a terrible accident involving Glenn Whritenour in turn two. Kane Stebbins, Dylan Cecce, Kurt Stebbins and Whritenour were four-wide in turn two, when the Stebbins No. 2 came together to make contact with Cecce’s No. 7.

Cecce’s machine darted left after the contact, clipping Whritenour in the right rear quarter panel. Whritenour’s car jetted hard right and went airborne off the steep back straightaway, flipping over and eventually landing on its roof. The red flag was displayed as the crowd went silent with concern for the former track champion. However, Whritenour would climb from his badly damaged No. 15 machine appearing to be ok and talking to safety officials.

The rest of the event saw Marlatt lead, but Dan Gardner made a run from his fourth starting spot to finally get around Branden Morseman for the runner-up position. Teddy Morseman continued to lead the points in third, while Branden Morseman and Kurt Stebbins filled out the top five positions.

“I cannot thank Nitro Fabrication enough for rebuilding this car after last week,” said Marlatt. “It’s obviously fixed, that’s for sure. Also Dylan Potter for his help, we had a mess when we left last week.”

A ninth place starting spot didn’t deter Chris Woodard from nailing down his third victory of the season in the Daugherty’s Auto Sales & Service Mini Stocks. Woodard is hoping to defend his title as division track champion in 2017, and would assume command from Dylon Gleason on lap eleven.

Gleason took the lead with a daring move around the outside cushion on lap seven, searching for his first victory since moving into the Mini Stock division. With the speed that Gleason has shown so far, his top five finishes will soon lead toward that first victory.

Scott Lehman got a little piece of redemption from a poor finish last week to finish third. Karl Born took what his crew called a “junkyard dog” backup engine to finish fourth, while John Hand Jr. turned in another great finish to round out the top five.

Speaking of redemption, Nate Freeland got a little himself on Saturday night by winning the twenty-lap Woodhull Auto Supply Front Wheel Drive feature. Freeland was swept past by Codie Baker to win the thirty-five-lap special the week before, but Freeland wasn’t going to let that happen again on Saturday night.

While trying to protect the lead with four laps to go, Freeland switched lines entering turn one, making contact with Baker sending Baker’s front tires up into the air. Baker would eventually finish third and made contact with Freeland post-race to display his displeasure with the contact.

“I really didn’t mean to make contact with Codie late in the race there,” said Freeland. “I knew he would be coming on the outside and I got out of my normal line trying something different to protect the lead. We wanted this one pretty bad.”

The Daugherty’s Auto Sales & Service Warriors youth race was ten laps in distance, although the tenth lap was difficult to get on the Border Drive Heating lap board. ‘Burnin’ Bacon’ gave his fans, ‘The Baconators,’ something to cheer about as he survived several last lap restarts to get the win over a hard charging point leader in Cole Youse.

Youse rebounded from an early race incident and spin to finish a fine second, as this week’s NAPA Auto Parts Driver of the Week. Carter Crooker turned in a season-best third place finish, while Brody Amidon and Quintin Buchanan filled out the top five.

Carter Dennis would best Allison Pierce in her first Woodhull start of the season in the Hobby Stocks Saturday night. The Hobby Stocks grew to four cars with Dennis, Pierce, Brent Williams and Joe Birdsall making up the field.

This Saturday at Woodhull Raceway will be RLB Trucking Night for the annual Scott Dennison Memorial. The SWL Awards and Photos Crate Late Models will race thirty-five laps in distance. They will be joined by the 370 Modifieds, Crate Sportsman, Street Stocks, Mini Stocks, Front Wheel Drives, Woodhull Warriors and Hobby Stocks. Race time is set for 6:30PM.