WOODHULL, NY – Saturday night saw the Scott Dennison Memorial race transition from the Crate Late Model division to the Street Stock division, with twenty-one drivers signing in trying to win one of the crown jewels for the Street Stocks at Woodhull.

Scott Dennison was a fierce competitor, who loved to have a good time at whatever he was doing whether it be racing, hunting or spending time with family. A fellow competitor shared over the weekend that Dennison once was fined by the track $50 for a violation. Dennison paid his fine with a smile- paid all in $50 worth of pennies.

Dylan Cecce would be the first Street Stock driver to win the Scott Dennison Memorial on Saturday night. In Victory Lane, he talked about the fact that when the announcement was made to move the event to the Street Stocks- every driver turned the intensity up wanting to win Scott’s race.

For Cecce, the win was extra special, as Dennison’s widow and daughters are close family friends. Though Cecce got the win, Brett “The Jet” Marlatt made it as entertaining a race as anyone could have expected.

Cecce took two terrible finishes out of three weeks to start on the pole for the thirty-lap, $600-to-win event next to Kane Stebbins in his No. 2. Marlatt started fourth and it was this pairing that eventually found themselves duking it out for supremacy.

The race was marred by several caution flags, with many top contenders falling to damage or flat tires after one driver’s exhaust apparently came apart, leaving hard to find debris in turns three and four.

Buck Payne, in his second start of the season since returning to the Street Stocks, started twelfth and worked his way up to a third place finish. Teddy Morseman and Mick Seeley helped out their championship point efforts out with top five finishes.

But up front, it was Marlatt doing everything he could to get around Cecce. Marlatt tried low, tried high and even tried to diamond the corner to get enough of a run underneath Cecce to take the lead.

Cecce was always able to keep his momentum up, just a groove higher than Marlatt to maintain the top spot. He noted in Victory Lane that Marlatt drove him as clean as any driver could in the waning laps.

“Brett drove me with a ton of respect, probably drove me cleaner than I would have raced myself there at the end knowing how much this race meant to everyone,” said Cecce.

“I have to thank Dylan Potter and all of our great sponsors and supporters for making this happen. Also to our wives and kids because it takes a lot of time in the shop to have cars this fast on the weekends.”

The race was one of the best of the night, and no doubt, was worthy of memorializing Scott Dennison the best way the Street Stocks could have on Saturday night. Scott’s daughters were both in attendance Saturday, presenting the trophy to Cecce, waving the green flag and shaking the hands of each driver during driver introductions.

This Saturday at Woodhull Raceway will see Mike Emhof’s CRSA 305 Sprint Tour roll into town for their lone stop of the 2017 season. The best 305 sprint drivers in the Northeast will be drive into town to put on a high flying show, with the best from the CRSA and the best from Western New York and Pennsylvania expected in attendance.

They will be joined by the 370 Modifieds, Crate Sportsman, Crate Late Models, Street Stocks, Mini Stocks and Front Wheel Drives. The Hobby Stocks and Woodhull Warriors will have the week off. Race time is set for 6:30PM. 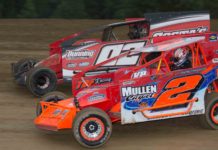 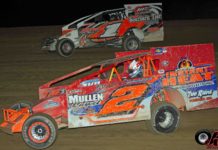 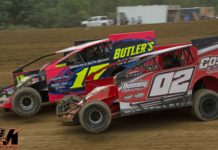