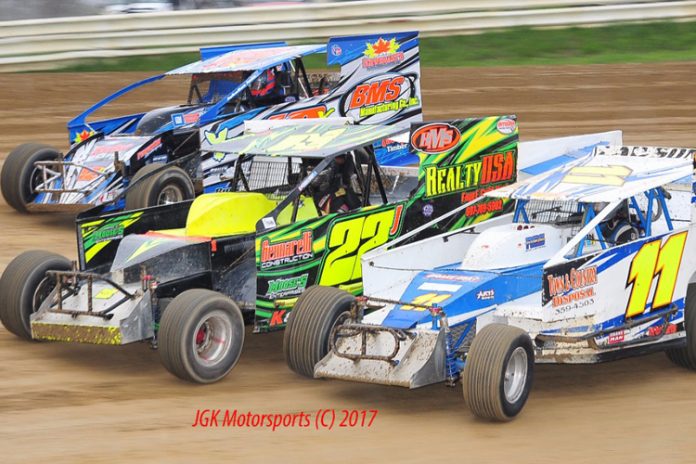 Ryan Tracy led the field to the green flag and took off to lead the opening laps of the event. But behind him, veteran racer Kevin Chilson would take over the point and lead his first lap at Woodhull in at least four seasons.

But while Chilson showed the field the fast way around, Lawson was clawing his way to the front of the pack. Chilson opened the door down low and that was all Lawson needed to take the lead.

Once out front, Lawson kept the field at arm’s reach. Including Billy Van Pelt who charged through the field to get as high as second, but didn’t have enough for Lawson on this night.

It was two feature wins in a row for the RLB Trucking, Woodhull Auto Supply No. 11 of Lawson, Van Pelt second, Chilson with his best finish of the season in third, Art Goodier with another top five in fourth and Frank ‘Stunning’ Dunning the top five.


Brandon Butler has also had several rough outings lately in the NAPA Crate Sportsman division, but he cashed in his bad luck chips on Saturday to park his Bomak, Brico Technologies, Hilliard Corporation No. 16 in Instant Heat Wood Pellets Victory Lane.

Mike “Action Jackson” led the field to Scott Lyon’s initial green flag. Jackson survived a few early race cautions to lead a few laps out front, but Butler was able to work the low side to wrestle the lead away from the veteran.

The race was littered with caution flags before the halfway mark, but none of the races slow downs were enough to rattle Butler on this night. Jake Dgien fought his way to second place, but would have to settle in for the runner up spot on Saturday night. Josh Keesey finished third, while Sportsman point leaders Stevie Hartman III and Dale Welty rounded out the top five.

John Waters claimed victory in the SWL Awards and Photos Crate Late Model division. Waters said it was great to have a number eleven machine in Victory Lane in honor of Front Wheel Drive competitor Adam DelGrosso, who suffered a major back injury on Friday in Dundee, NY and will miss two to three months of on-track action.

The Street Stock drivers went fifty laps in distance on Saturday in the Joe Willcox Performance Automatics feature that paid $750-to-win. Glenn Whritenour picked up the weekend sweep, after taking a win on Friday in Dundee and surviving a flurry of cautions to win at Woodhull Saturday. A feat that Whritenour has been able to do on at least two if not three occasions in 2017.

Dylan Cecce was second, in a swap of finishing positions from several weeks ago. Cecce and Brett “The Jet” Marlatt picked up several points on point leader Teddy Morseman, finishing second and third. “Mick The Quick” Seeley knocked off another top five finish to finish in the fourth spot. Jeredd Dennis, in his first Woodhull race back since having surgery a few weeks ago, came back to finish fifth.

It’s said that a measure of a stock car driver can be shown when that driver is faced with adversity on or off the track. Saturday night before his Daugherty’s Auto Sales Mini Stock feature event, Chris Woodard found out that a close family member had been rushed to the hospital after winning his heat race.

With Woodard and the team locked in the point battle for what could potentially be their second-straight title, Woodard stayed to complete his feature before making the trip to be with his family. Woodard drove inspired during the twenty-lap event, taking down his fifth Mini Stock win in ten points-paying starts in 2017.

Rick Amidon almost made it a Team Amidon Sweep to finish in second in a badly needed podium finish- more on that later. Karl Born, Scott Lehman and Ron Dailey Jr. filled out the top five finishers.

Codie Baker raced his ‘SloBalt’ No. 14 to victory lane in honor of his teammate DelGrosso. Baker made it two weeks in a row, winning in the Woodhull Auto Supply Front Wheel Drives. He will now cut into Shawn Gleason’s point lead a little more, but not by a wide margin as Gleason would finish second.

In the Daugherty’s Auto Sales & Service Warrior division, there was a new winner in Victory Lane as Brody Amidon nailed down career victory number one. Amidon has been so close to victory in 2017 and last season in 2016, but finally found the key to unlock the gates to Woodhull Victory Lane on Saturday night.

It was likely a relief and a joy for Brody- but an even bigger relief for his father Rick who has been working a lot of hours in the shop doing whatever he can to find speed in the brightly painted ‘orange deuce.’ The team has struggled under the hood this year and sure seem to have it figured out.

Amidon survived a caution-filled Warriors event that had to be shortened in laps with only a couple of laps left remaining.

Carter Dennis continued his winning ways on Saturday with another win in the Hobby Stock division. Saturday’s victory makes it seven victories overall and six during points-paying races.

This coming Saturday at Woodhull Raceway is a special night indeed, as the annual Jake Davis Memorial Modified King of the Ring is on top. Dgien Trucking and Riverfront Collision come together to put on this great event in memory of a young driver taken way too soon from the community and the track.

The King of the Ring plus a regular show will take place for only a $12 general admission ticket for adults 13 and up, while senior passes and ages 8-12 are only $6. Children 7 and under are always free at Woodhull Raceway and camping is also free on the property.