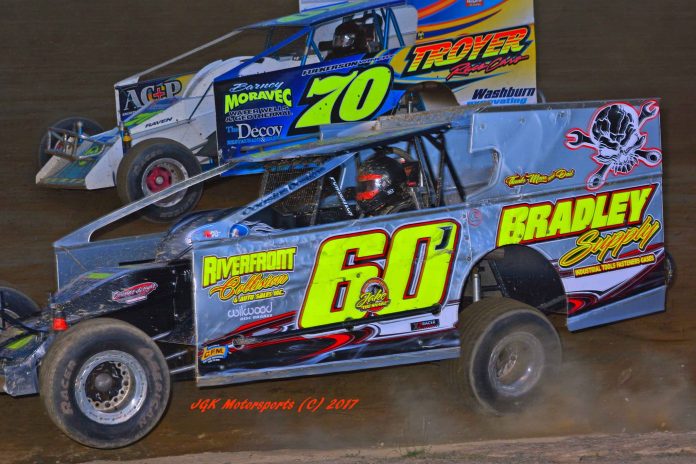 WOODHULL, NY – Dgien Trucking and Riverfront Collision will present the racing action on the High Banks this Saturday night at Woodhull Raceway as the 5th annual Jake Davis Memorial King of the Ring for the Insinger Performance 370 Modifieds will be held.

One of the most anticipated events of the Summer is the Modified King of the Ring and the Davis family has stepped up in a big way to make the 2017 running even more special. The event will see drivers toss tennis balls into the crowd, so when that driver wins the fan who catches that tennis ball will win as well.

Dgien Trucking also has a list of giveaways planned as well, with fans being encouraged to brush up on their Woodhull Raceway trivia skills for this weekend.

Jake Davis was an up and coming dirt racer who had an incredibly bright future ahead of him on the Steuben County dirt. He was lost before his full potential could shine down on the third-mile Woodhull Raceway, but his family, friends and speedway officials wouldn’t let their loss be how they would remember ‘Jake the Snake’.

The very first King of the Ring for the Modifieds finished in storybook fashion, with Jake’s uncle Kenny Peoples Jr. taking the popular win in 2013 over Billy Van Pelt. That race and the circumstances surrounding that race will be featured on Woodhull’s website later this week in preparation for this weekend’s fifth running of the event.

2014 saw Josh Nobriga win in the final round over Joe Dgien, while ‘The Maniac’ Mike Bills won the 2015 running over Van Pelt. Van Pelt finally was able to win a Jake Davis Memorial last season in 2016. Will we see the fifth different winner in five tries this weekend? Make your way to Woodhull Raceway this weekend so you can find out live, in-person.

The King of the Ring is a ‘knockout style’ single elimination match race that sees drivers compete in two lap match races. The winner of each match race moves on to the next round, while the second place car heads back to the trailer to make final adjustments for that night’s A-Main.

Fans can find their way into the grandstands Saturday at 4:30 for only $12 for adults 13 and up. Seniors and ages 8-12 will be $6. Children 7 and under are always free at Woodhull Raceway. Free camping is offered on the speedway grounds for those wishing to make it a weekend of family, friends and dirt track racing.

Woodhull Racewat can be found in Woodhull, NY, just 30 minutes West of Corning, NY, competing weekly on Saturday nights from mid-April all the way until Labor Day Weekend. The track offer numerous special invents including the Patriot Sprint Tour 360 Sprints and the Short Track Super Series Modifieds in mid-August.