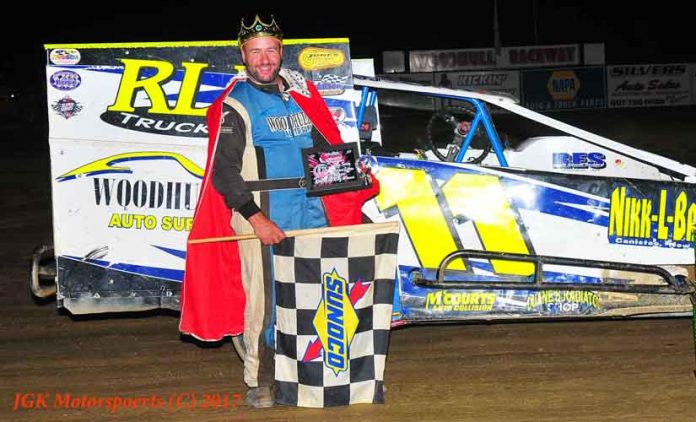 WOODHULL, NY – Donnie Lawson has won heat races, feature races and a championship in the Modified division at Woodhull Raceway. But even with a racer sharing the success he has- even Donnie Lawson still had one race that had eluded him since it had been held in 2013. The Jake Davis Memorial King of the Ring.

In a bit of bittersweet irony, Lawson who is a teacher at the Jasper-Troupsburg Schools, taught Davis in sixth grade and had vivid memories of the up and coming racer on and off the track. After Lawson beat out Art Goodier for the 5th Annual Jake Davis Memorial, Lawson reflected on the memory of the young man the event is named after.

“Jake was a great kid and it’s sad that he can’t be here with us to celebrate this great event,” said Lawson.

“I taught Jake in school and he was just a great young man. I want to thank the Davis and Peoples family, Dgien Trucking, Ted and Brandi White and everyone involved in putting on this race.”

The King of the Ring involves a two-lap, head-to-head match race, single elimination with the winner advancing to the next round and the loser exiting the speedway to the pit area. Once the race had funneled down to the final two cars, the fans were guaranteed to see a new winner of the event and the fifth different winner in five King of the Ring races.


The battle in the championship round was a battle of the Teo’s, fitting of Davis’ memory. Lawson, and the car he has won the last two Modified races in, took the initial lead from Goodier but Goodier pulled off a crossover/slide job into turn three that saw the fans jump up out of their seats to fist-pump the show being put on by Lawson and Goodier.

But just as Goodier had a crossover for Lawson, Lawson had one to come back at Goodier to take the lead for the final lap. Lawson would hold off Goodier to take the win and the $1,000 top prize, while Goodier finished second and picked up a cool $550 for his efforts.

“He slid up a little, so I turned down and gave him a good run down the back,” said Goodier post-race.

“I hope the fans enjoyed that, thank you for those that put the show on and thanks to my car owner and crew for giving me the opportunity.”

This coming Saturday at Woodhull Raceway is a special night as the Patriot Sprint Tour 360 sprint cars roll into town for their second and final stop at Woodhull for the season. Bryan Howland is scheduled to be in the house and Woodhull Raceway plans to honor him in his final planned Woodhull start.

Fans can visit Woodhull and take in the action for only a $18 general admission ticket for adults 13 and up, while senior passes and ages 8-12 are only $10. Children 7 and under are always free at Woodhull Raceway and camping is also free on the property.

It will be an exciting show featuring the 370 Modifieds, Crate Sportsman, Street Stocks, Mini Stocks and Front Wheel Drives. The Crate Late Models, Woodhull Warriors and Hobby Stocks will have the night off. Race time is set for 6:30PM.