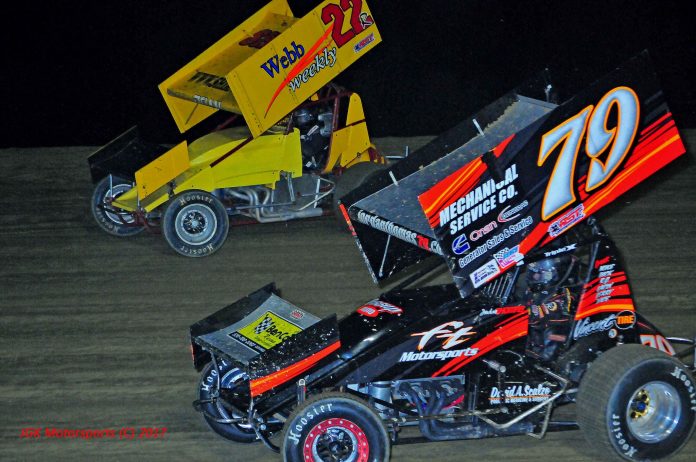 WOODHULL, NY – It will be a Saturday night of high-flying action as Mike Emhof Motorsports’ Patriot Sprint Tour will roar into town for their second of two stops at Ted and Brandi White’s Woodhull Raceway, sponsored by Lamb & Webster.

Founded in 1960, Lamb & Webster is the go-to location for equipment sales, service and parts for all of your farm equipment needs.  With the flagship store in Springville, NY, Lamb & Webster has proudly served the Woodhull community since 2002.  Their Woodhull location proudly offers New Holland, Kubota, Cub Cadet and many other product lines…including equipment financing!

Lamb & Webster proudly presents the Patriot Sprint Tour this week and will return as the headline sponsor for next weekend’s Lucas Oil Tractor Pull.

For the second time this season, the A-Verdi Storage Containers Patriot Sprint Tour will be returning to the Woodhull Raceway this Saturday, July 22. The tour visited the Steuben County facility in May when Bryan Howland picked up the win over Steve Collins and George Suprick.

After a tough month of racing in June, Jared Zimbardi still remains atop the point standings with four wins on the PST American Tour schedule. Steve Collins has a win and multiple podium finishes to keep pace with Zimbardi, but still trails him by 61 points heading into Saturday night. Kyle Drum is third at 1390, with Jordan Thomas (1254) and Joe Trenca (1235) complete the top five in the American Tour Championship.

This Saturday’s show will be presented by PST Marketing Partner, Evingham Site Excavation of Bolivar, NY. ESE has been instrumental with the Patriot Sprint Tour as the Dash for Cash Series presenting sponsor over the last four seasons. The four-lap dash is made up of drivers who finished in positions 9-14 in our accumulated passing points program that takes place during our qualifying heats. In 2016, David Just collected the most points and captured the series points championship.

Woodhull Raceway’s weekly racing divisions that will be on hand will include the Insinger Performance 370 Modifieds, NAPA Crate Sportsman, Joe Willcox Performance Automatics Street Stocks, Daugherty Auto Sales & Service Mini Stocks and Woodhull Auto Supply Front Wheel Drives.  The Street Stocks will draw for the third Clash 4 Cash of 2017, while the Crate Late Models, Warriors and Hobby Stocks will all get the week off.

Fans can find their way into the grandstands Saturday at 4:30 for only $18 for adults 13 and up.  Seniors and ages 8-12 will be $10.  Children 7 and under are always free at Woodhull Raceway.  Free camping is offered on the speedway grounds for those wishing to make it a weekend of family, friends and dirt track racing.

Woodhull Racewat can be found in Woodhull, NY, just 30 minutes West of Corning, NY, competing weekly on Saturday nights from mid-April all the way until Labor Day Weekend. The track offer numerous special invents including the Patriot Sprint Tour 360 Sprints and the Short Track Super Series Modifieds in mid-August.