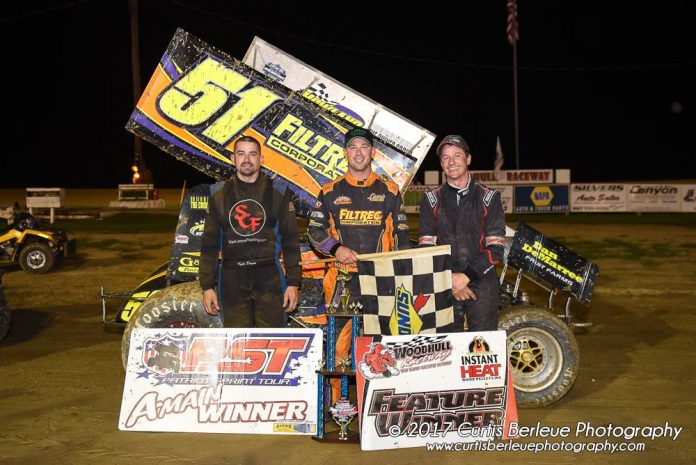 WOODHULL, NY – In his final season of racing under his own operation, Bryan Howland has continued to have success running with the Patriot Sprint Tour picking up his third win in 2017 at the Woodhull Raceway.

Local favorite, Steve Collins started on the pole and got out to an early advantage over second place running Howland. From the start, no one would have anything for Collins having almost a straightaway lead from the rest of the field.

The only caution would occur on lap seven when Josh Azzi would spin in the middle of turn four that would also collect the 121 of Will Glover.

Collins would lead Bryan Howland, Kyle Drum, Scott Goodrich who started 11th, and Jeff Trombley. On the next restart, Collins would once again use that clean air to pull away from Howland and Drum.

Lap traffic would not be an issue until about lap 15 where the racing started to get interesting between the two race leaders. Collins would slip by multiple lap cars in attempt to separate himself from Howland and Drum but it would not last very long.


Howland would continue to keep pace with Collins and would go wing to wing with him on lap 21. The very next lap, Collins would get behind the slower car of George Suprick which enabled Howland to get a great run on the inside and as they came out of turn four, Howland would suddenly be the new race leader on lap 23.

Kyle Drum would also find a low line that would work to his advantage taking the runner up spot from Collins. The checkered flag would fly where Bryan Howland took his second win at Woodhull this season and his third with the Patriots in 2017. Kyle Drum and Steve Collins would complete the podium, Scott Goodrich would take fourth after starting 11th and Cory Sparks would complete the top five. This was Howland’s fifth career win at Woodhull and his 31st overall with the tour.

The series is off next weekend as All Star Circuit of Champions makes their lone appearance to New York State and many teams have intentions of running those events. The tour will pick right back up with return visits to Outlaw Speedway on Friday, August 4th and Stateline Speedway on Saturday, August 5th.