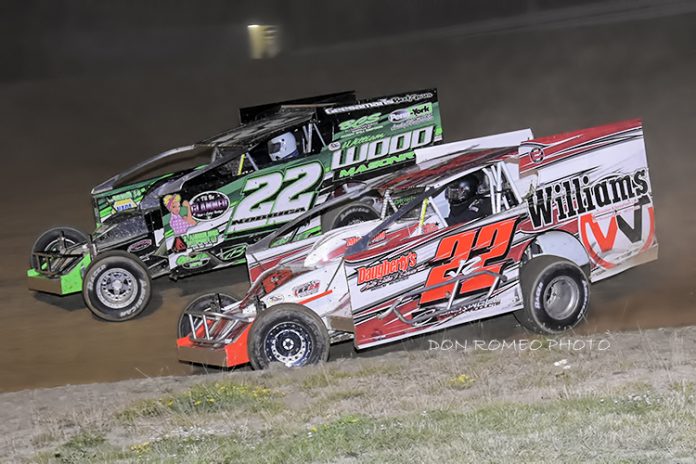 WOODHULL, NY – In what was a storybook night at Woodhull Raceway, both Bryan Howland (Patriot Sprint Tour) and Jeffery Daugherty (370 Modifieds) stole the show. Howland, in what could be his final start in a sprint car at Woodhull, won in thrilling fashion to complete the sweep of PST shows in 2017.

All the while, Daugherty raced away on a tacky, hammer-down track to his second straight and second career Modified win on the High Banks.

Friend of the Howland racing team and Woodhull Crate Sportsman competitor, Jordan Bacon, drew Howland the outside pole starting position for the twenty-five-lap A-Main. Local favorite Steve Collins drew the pole, to the roar of his local fans, and took off flying at the drop of the green flag.

Prior to the redraw, Woodhull Raceway and the Patriot Sprint Tour honored Howland on the front stretch with a large photo for their shop, honoring his longtime support of sprint car racing at Woodhull Raceway.

Collins looked untouchable early on, setting a torrid pace as the leader and quickly approaching lapped traffic on the fifth lap. But a caution on lap seven slowed the pace down as Josh Azzi got spun around, collecting Will Glover.

Collins once again pulled away from the field on the restart, and hit slower traffic again on the race’s fifteenth circuit. Traffic was dense and difficult to navigate, which allowed Howland to close the gap and draw even on lap twenty-one with four to go.

On the very next lap, Collins went high to attempt to clear a lapped car but unfortunately the lapped machine also chose the outside line- pushing Collins up and over the preferred groove. Howland pounced on the opportunity and was shown as the leader on lap twenty-three, leading the final two laps to claim his third victory of 2017.

Kyle Drum threw a few swings at Howland in those last two laps, but had to settle for second. Collins saw victory slip away to finish third, followed by Scott Goodrich and Cory Sparks the top five.

In the Insinger Performance 370 Modified division, Jeffery Daugherty started on the front row with Russell Morseman on the outside pole debuting his RMR Gen 2 chassis at “New York’s Toughest Bullring.”

Daugherty quickly was the rabbit in this event, pulling away to a large lead before the race’s first caution flag. During that green flag run, Brian Doolittle and his HigFab Chassis moved past Morseman for the runner up position. Dillon Groover also quickly made his way from the fourth starting spot to the outside lane to try and make passes for position.

On the restart, the battle between Morseman, Doolittle and Groover was intense, likely being exactly what Daugherty and his crew would have wanted to see in his rear view mirror if he had one. Doolittle did yeoman’s work keeping Groover and later Billy Van Pelt behind him and scored his best finish of the season in second.

But the story was Daugherty, who in only five races has now scored two straight victories in the Williams Construction and Sprayfoam No. 22jz. Doolittle finished second over Groover, Van Pelt and Morseman.

Point leader Stevie Hartman III picked up a huge win on Saturday night in the NAPA Crate Sportsman division. Hartman quickly worked his way to the front of the field to take the lead, but second-high point man Dale Welty nipped at his heels for the remainder of the event.

Hartman came into the race with a two-point edge over Welty and picked up three additional points from the heat races. The win in the feature will now give him a ten-point edge but this title chase will come right down to the very last night the way this season has gone.

Welty nearly had an opportunity to close the gap on Hartman, as Hartman worked lapped traffic and really had to carefully pick his way by. Unfortunately for the driver of the famed No. 123, that opportunity to capitalize just never panned out.

Jake Dgien was strong as well, and quite quietly finished on the podium in third place. Dayton Brewer did everything he knew how to get by Dgien, but ultimately had to settle for the fourth spot. Mike Jackson scored his first top five finish since May 13th and extended his top ten streak now at three races.

It’s not been any secret that the 2017 season hasn’t panned out for Tracy Dunn in the Joe Willcox Performance Street Stock division, but it looked for fourteen laps on Saturday night that he might just slay the dragons that have controlled the class all year.

Teddy Morseman stalked Dunn for the first fourteen laps of the race, waiting for any opportunity or slip up from the Southern Tier Generators, Golden Age Cheese No. 21. That opportunity for Morseman came as the pair clicked off lap fifteen when Dunn slipped up high off turn four.

Morseman streaked by Dunn and stepped on the field’s throat to close out his first and long-awaited victory of the 2017 season. Dunn attempted a crossover move into turn one, but fell into the clutches of Glenn Whritenour and Dylan Cecce. The four cars of Dunn, Morseman, Whritenour and Cecce ran nose-to-tail for many laps before Morseman made the race-winning pass.

Morseman came into the event trailing Cecce for the lead by three points and left Woodhull Saturday night with a five-point lead going into the August push for the title.

Ray Hyer swept the weekend between Friday at Dundee and Saturday at Woodhull Raceway, winning both Mini Stock features for car owners Brian and Vanessa Grant. Hyer saw a win get away from him last Saturday night, so a win this weekend was redemption for the team.

Hyer started up front with Chip Warner, but Warner was extremely fast in his No. 73, leading several laps before Hyer took the point. Alan Crooker, who has been extremely fast in his own right, was chasing Hyer down for the checkered flag but fell just a little short of getting his first of 2017.

Hyer switched lanes and started running the bottom, as there was a lack of a cushion to pound off of like his No. 4D6 typically likes to do. The sprint cars and Modifieds pushed the groove so high on the track; there simply wasn’t enough room to build a cushion.

Jason Ketrow finished in the third spot to get his 2017 efforts back on track. Point leader and defending track champion Chris Woodard finished in the fourth spot, while Karl Born brought his No. 06 home with a top five.

Codie Baker won a thriller in the Woodhull Auto Supply Front Wheel Drive division on Saturday. The race appeared that it would be Ryan Austin’s to win, but Baker found the outside late to his liking to take the lead with only two circuits left to complete in the twenty-lap feature.

Shawn Gleason threw everything but the kitchen sink at Austin in the closing laps to try and get by for the second spot. But Austin had enough speed and handling to keep Gleason at bay in the waning laps. Teammates Nate Freeland and Matt Prescott rounded out the top five.

With the win, Baker cut Gleason’s point lead from seventeen to eleven with only five point races remaining.

Fans can visit Woodhull and take in the action for only a $15 general admission ticket and camping is also free on the property.