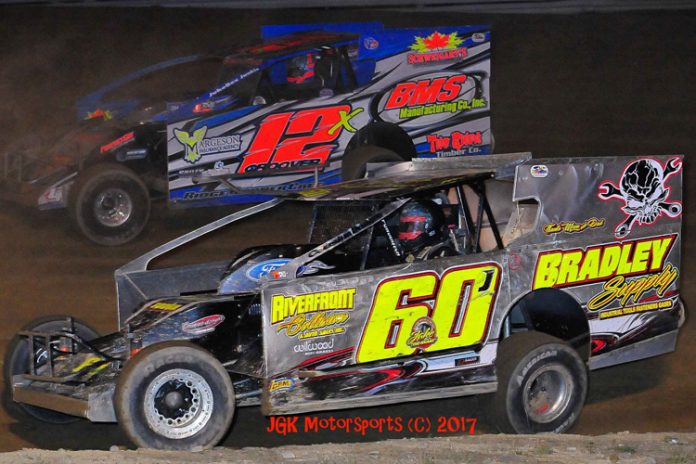 WOODHULL, NY – Russell Morseman and Kenny Peoples Jr. led the field to Scott Lyon’s green flag, with Morseman quickly taking control of the race with a lightning fast No. 44. Morseman dominated the race in search of his first Modified victory and came within three laps of pulling the feat off.

Peoples settled into the second position and took care of his car and tires as the leaders logged laps early in the going. This left Brandon Martin and points contender Dillon Groover to battle for third and fourth. NAPA Auto Parts Driver of the week Brian Doolittle also worked his way into the top five with another solid run for the unsponsored No. 7.

The race took one of two major turns when a jam up entering turn one saw Billy Van Pelt make contact with the back bumper of Groover’s No. 12x. Groover then made contact with the Peoples Bakery No. 5k and Peoples spun.

Van Pelt was forced to start at the tail of the field with Peoples for contributing largely to the start of the accident. The 18-time track champion took that opportunity before halfway to make an adjustment in the pits, exiting the pits as the green flag was displayed and falling into line at the tail of the field before making his first pass in turn three.

The race’s second major turn involved Groover and the race leader Morseman. Contact with Morseman sent the race leader into a spin cycle, collecting Art Goodier and Doolittle. Morseman made his displeasure known after what looked to be a career-first victory vanished with three laps to go.


This handed the lead to Modified rookie and longtime Woodhull Raceway supporter Brandon Martin. Martin, driving the Davis-owned No. 60j, was at the point with three laps to go and veteran Donnie Lawson and Van Pelt nipping at his heels.

Martin survived the final restart and not only held off the cagey veterans, but pulled away and stretched his lead at the double-checkers for career win number one. Martin took the only Ford-powered Modified to Instant Heat Wood Pellets Victory Lane over Lawson, Van Pelt, Peoples and Josh Keesey who logged his first Modified Top 5.

In the NAPA Crate Sportsman division, AJ Costley who was competing in the first race since taking the hardest hit he’s ever taken at Woodhull, left no doubt that he was not shaken nor stirred in the altercation on July 22. Costley started on the pole and never left the top spot to score his second win of the 2017 season.

He did have to hold off the likes of Tim Guild and Dayton Brewer at different stages in the race, but Costley was true each and every time a battle or challenge was thrown his way. But the many man hours by he and crew member Dan Beach paid off with a trip to Instant Heat Wood Pellets Victory Lane for the Ridge Runner Café No. 40 over Brewer’s Morgan’s Auto Repair No. 17 in second.

Kurt Stebbins thought that he had John Waters’ number on Saturday night in the SWL Awards & Photos Crate Late Models. He was able to catch and pass the defending RUSH Dirt Late Model Series champion in the heat race and was leading the twenty-lap feature event in the closing laps.

Unfortunately for Stebbins though, he didn’t lead off the final turn to seal the deal. Waters beat out Stebbins at the line by inches to pick up his seventh feature win of the season. Stebbins was able to make the pass on Waters just past the start/finish line but it was not enough to hold off Waters late in the going.

Waters has been red hot at times in 2017 at Woodhull, which has elevated him into the talk to challenge his teammate Steve LeBarron for the track championship now. LeBarron had cruised away with the points lead during late Spring, but now with seven wins Waters is there and might just have taken over the lead with four races remaining.

Though he didn’t get the checkered flag in the Crate Late Models, Kurt Stebbins wasn’t about to let the Joe Willcox Performance Automatics Street Stock feature get away from him. Stebbins made quick work of his fourth place starting position to take the lead from Jim Buck, who led his first competitive lap at Woodhull in a good number of years.

While Stebbins led, the battle from second on back was as entertaining as it gets. Glenn Whritenour, Brett Marlatt, Tracy Dunn and Dan Gardner put on a show within the top five. Whritenour would settle into the runner up spot, but an infraction with the trailing arm on the left hand side would not allow his No. 15 to pass post-race inspection.

Point leaders Teddy Morseman and Dylan Cecce both had difficult nights. Cecce with a flat tire during the race and Morseman with a flat tire and eventually problems with front end damage that saw him pit and lose a lap on the ensuing restart.

Stebbins was the driver standing in Victory Lane, just nine days after rolling that car at McKean County Raceway in a Thursday night special event. The damage was limited to bolt-on parts and pieces, allowing Stebbins to bring the “Green Machine” out to Woodhull on Saturday night.

It was not easy though, not by any stretch of the imagination. Woodard started in the eleventh position and patiently picked his way to the front of the pack in their twenty-lap feature. Once out front, he would have to hold off challenges from Jason Ketrow and Alan Crooker.

Crooker was on a hot streak of his own after winning his heat, running well in the Mini Stock King of the Ring and seeing Carter Crooker take the same car to Victory Lane in the Warrior division. After a tough week two weeks ago, Dylon Gleason ran a very patient race to finish in the fourth spot. Williamsport, PA pilot Karl Born rounded out the top five.

Woodhull Raceway wishes to thank Daugherty’s Auto Sales & Service for their support of Mini Stock racing on the ‘High Banks’ and for making the Mini Stock King of the Ring possible in 2017.

Shawn Gleason was the most recent victim to Codie Baker making a race-winning pass with two laps to go enroute to his sixth victory of the 2017 season. Gleason started ninth and eventually found his Comfort Zone Heating and Air Conditioning No. 26mk leading the field in the twenty-lap Woodhull Auto Supply Front Wheel Drive feature.

But as Gleason led the field, Baker was knifing his way through the field from his tenth starting position. With five laps remaining, Baker had closed in on Gleason and was looking for a way to get around. Gleason ran the top, Baker’s typical preferred line, so Baker had to work Gleason over in the last five laps to get by on the bottom lane.

As the pair came down for the two laps to go signal from Brad Ovens, Baker had finally set Gleason up to make a crossover move down low exiting turn two. Gleason never said die though, as he would fight back and try to cross Baker over and use the same exact move to no avail.

Baker parked the Bear’s Auto No. 14 in Victory Lane ahead of Gleason, Nate Freeland, Matt Prescott and Nick Brown.

The Woodhull Warriors were graced with a new winner on Saturday night as Carter Crooker picked up his first career victory at “New York’s Toughest Bullring.” Crooker started in the seventh position and clawed his way to the front of the record-setting fourteen car field.

After Crooker took over the point, point leader Cole Youse began giving chase to the blue and yellow No. 32. Several late race cautions flags gave Youse an opportunity to close up to the back bumper of Crooker, but Crooker had a bad fast racecar that was not going to be denied on Saturday night.

A late race incident that involved Ronnie Dailey and Brody Amidon, saw Austin Labar advance to the third position at the finish over Tierney White and Garrett Wilson with a great top five run for the No. 53c.

Carter Dennis did what he needed to on Saturday to win the Hobby Stock feature- survive. The Hobby Stock feature was a wild one, as division newcomer Dennis French took a scary flip over off the backstretch of the tight third-mile bullring. French did a full rotation in the air before coming down on all four tires, and eventually climbed out of the car unharmed.

Dennis battled for the lead with Brent Williams, but took over the lead and held a commanding lead at the finish of their ten-lap feature race. Billy Joe Birdsall, Williams, Aaron Miller and French rounded out the five-car field.

This coming Saturday at Woodhull Raceway is a special night as the 270 micro sprint cars roll into town for their annual 270 Micro Reunion presented by SWL Awards and Pro Signs & Designs. Upwards of forty cars is anticipated for the 2017 reunion, after an incredible turnout of cars last season.

Fans can visit Woodhull and take in the action for only a $12 general admission ticket for adults 13 and up, while senior passes and ages 8-12 are only $6. Children 7 and under are always free at Woodhull Raceway and camping is also free on the property.

MINI STOCK KING OF THE RING: CHRIS WOODARD over Ray Hyer in Final Round